The theme for the photography competition in 2016 was Big to Small. The Society would like to congratulate the winners, who were celebrated at the Biology Week annual award ceremony.

Photographer of the Year 2016: Winner "I discovered these two huge elk-bulls in the middle of the river on a hike in the Banff National Park. They proceeded to fight in front of the Rocky Mountains. The Elk Bulls are enormous and dangerous during heat, but they seem so small and fragile in their environment, especially in front of this fantastic mountain range."

Photographer of the Year 2016: Runner-up 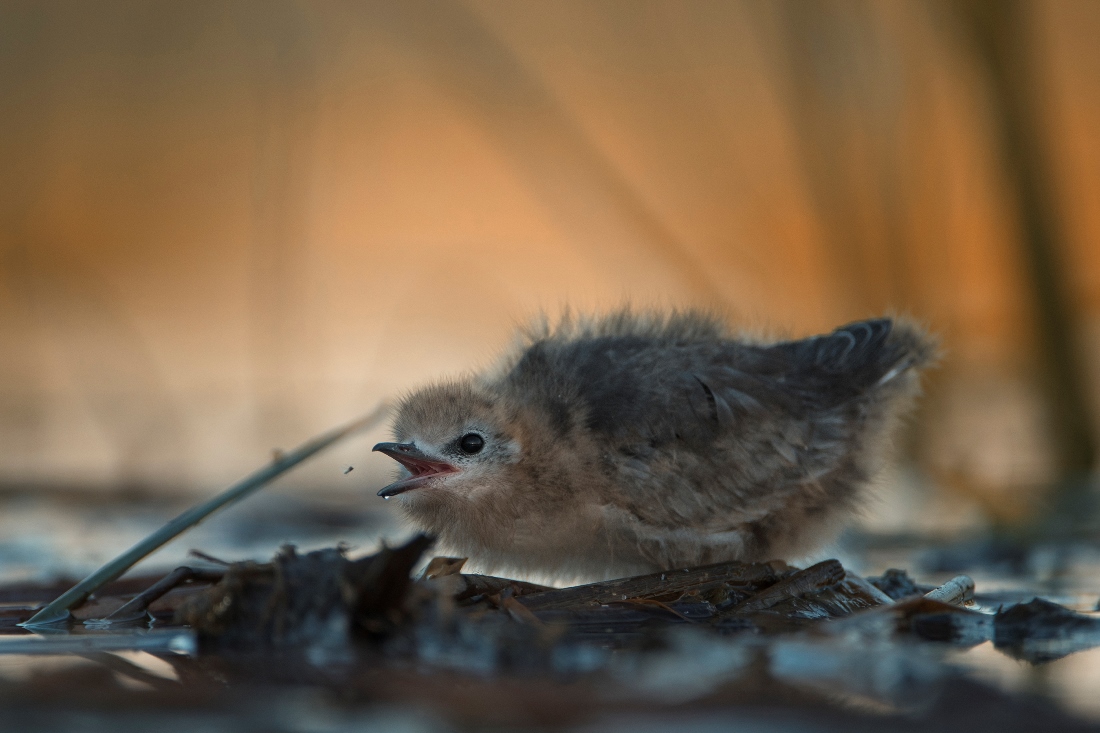 Hunt for mosquitoes by Lukasz Boch

"The tiny mosquito is the beginning of the road for terns. In the future when the tern grows up, he will start to hunt for larger food like dragonflies and fish."

Photographer of the Year 2016: Highly commended 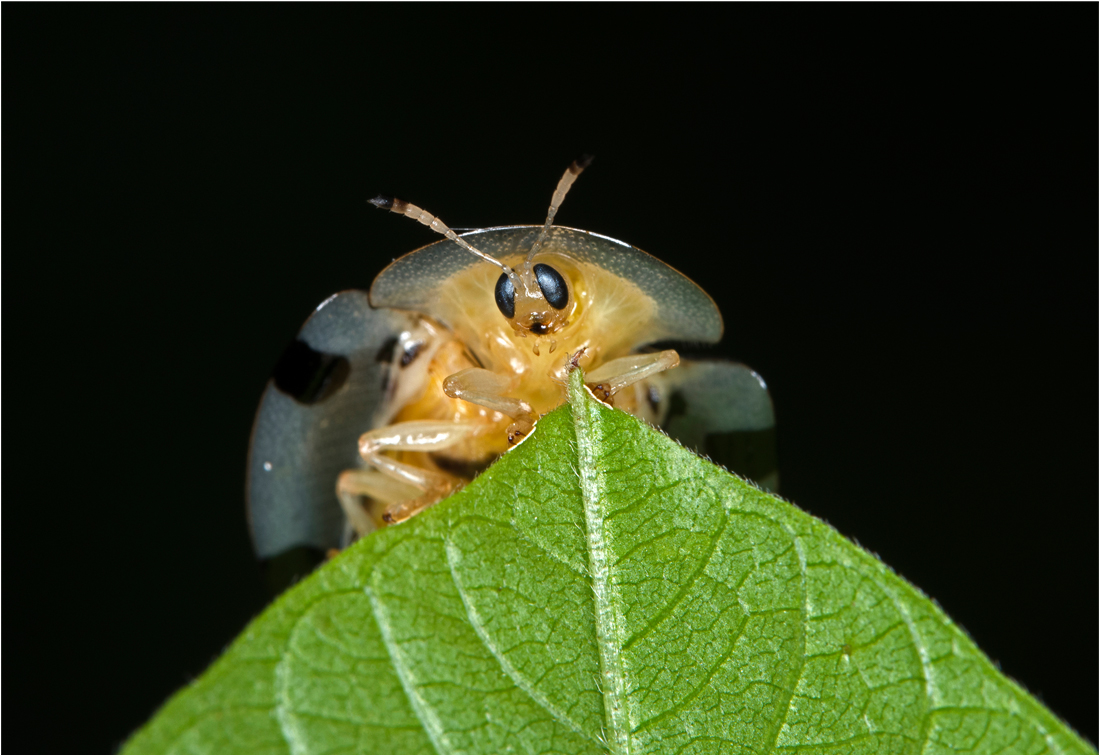 Young Photographer of the Year 2016: Winner The Beginning by Pradyuman Samant

"We have a huge planet with some tiny creatures we often ignore. Some people find it gross to even look at them and some aren’t even bothered. But no matter how big our world is, the beginning is always small. These bush frog tadpoles will be part of our “BIG” world someday, while others will be washed away in the rain." "The blue banded bee (Amegilla cingulata) is pointing this sheath towards the flowers in preparation for sipping nectar." The Autumn's Beauty by Amitava Chandra

"This unique white grass, a gift from nature to enhance the beauty of autumn, is colloquially called kash. For a short period during autumn it erupts in abundance without any cultivation or help from man." Pink Over Pink by Daniel Buron

"Flamingos feed on small crustaceans, algae and other microscopic plankton components. Some of these food sources contain carotenoid pigments which give flamingos their characteristic pink plumage. Some salinas, such as this, have ideal conditions for halophilic bacteria and flagellate unicellular alga Dunaliella salina, which give watch this deep red colour." Skin of the lip of a cat by David Linstead

"This microscope image is taken from a vintage Victorian slide mount of the lip of a cat by the noted Victorian slide mounter Edmund Wheeler. It shows the skin surface, the hairs (fur) and the capillary blood supply of the skin surface. Colour is produced in the microscope by polarised light and a rotatable plastic film retarder, and is not the result of post processing. We are used to seeing the Big, the fur of a cat’s coat, but this image produces a very unusual view of the Small, the individual hairs and the minute capillaries that nourish them with blood. This example shows great skill in the injection of carmine dye into the capillaries and the preservation of anatomical detail." 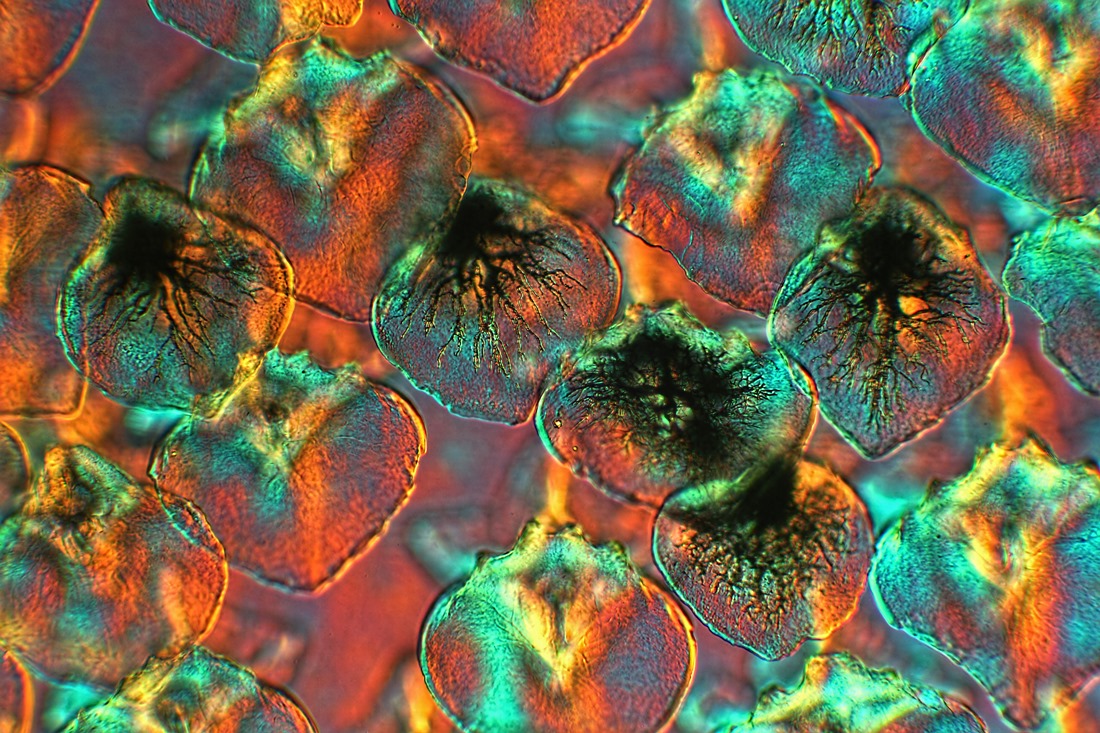 "This microscope image shows several pigment scales scattered in the skin of a Porbeagle shark (Lamna nasus). The image is taken from a Victorian slide mount of shark skin. Colour is produced using the illumination technique of differential interference contrast in the microscope, together with an adjustable compensator (lambda plate), so called 'colour DIC'. It fits within the theme as microscopic photography is used to visualise the Small and its contribution to the Big. Here, Big is the pattern on the skin of a large shark and Small is the individual scales." "This image is of PC3 cells, which are highly aggressive prostate cancer cells that I work with in my research. When looked at as a whole, the image looks vaguely like that of the moon. By eye, the cell clumps represent craters and the areas where there are no cells represent the smooth areas of the moon."