The Nobel Assembly at Karolinska Institutet has today awarded the 2016 Nobel Prize in Physiology or Medicine to Professor Yoshinori Ohsumi, from the Tokyo Institute of Technology, for his discoveries of mechanisms for autophagy. 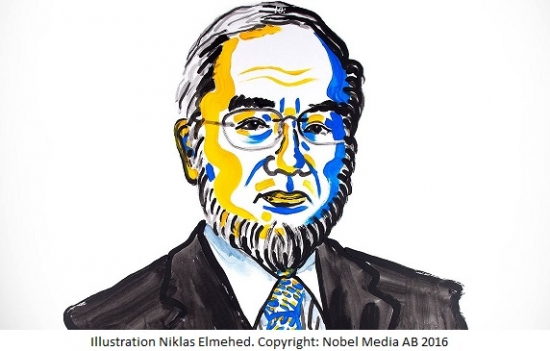 The concept of autophagy (self-eating) emerged during the 1960's, when researchers first observed that the cell could destroy its own contents by enclosing it in membranes. The cell forms sack-like vesicles that are transported to a recycling compartment, called the lysosome, for degradation.

Difficulties in studying the phenomenon meant that little was known until, in a series of brilliant experiments in the early 1990's, Yoshinori Ohsumi used baker's yeast to identify genes essential for autophagy. He then went on to elucidate the underlying mechanisms for autophagy in yeast and showed that similar sophisticated machinery is used in our cells.

Ohsumi's discoveries led to a new paradigm in our understanding of how the cell recycles its content. His discoveries opened the path to understanding the fundamental importance of autophagy in many physiological processes, such as in the adaptation to starvation or response to infection. Mutations in autophagy genes can cause disease, and the autophagic process is involved in several conditions including cancer and neurological disease.

Professor Simon Richardson FRSB, senior lecturer in biopharmaceutical sciences, University of Greenwich, said:
“From the 1974 Nobel Prize awarded to Claude, de Duve and Paladeto to the 2013 Prize awarded to Rothman, Schekman and Südhof, it is wonderful to see the field of membrane trafficking’s importance underscored. This is true not just from the perspective of drug discovery and understanding pathology at the molecular level, but also from the perspective of drug delivery. A drug, no matter how specific and potent is not effective if it can’t find its target! I sincerely hope the 2016 Nobel prize for Physiology or Medicine, awarded to Yoshinori Ohsumi continues to energise and maintain the momentum underpinning the importance of understanding the field of membrane trafficking.”

Dr Nicholas Ktistakis, group leader in the Signalling research programme, Babraham Institute, said:
“Professor Ohsumi has done pioneering work on autophagy for many years, and in fact in a real sense he started the field. What is remarkable is that he has contributed to our understanding of the pathway at many levels, genetic, biochemical, cell biological and his contributions have always been very significant. The significance of the pathway for health and disease is best shown by observations made in recent years (many by Professor Ohsumi’s students) that animals with ineffective autophagy show neuronal degeneration and hyperplasias in various organs.

"To this day, Professor Ohsumi continues to publish excellent work. Personally, he is a remarkably humble man and I think that this enhances the pleasure for all of us that he has been recognised today."