One hundred and ninety six degree programmes at 20 universities have been formally awarded Degree Accreditation or Advanced Accreditation by the Royal Society of Biology at the 2016 awards ceremony. 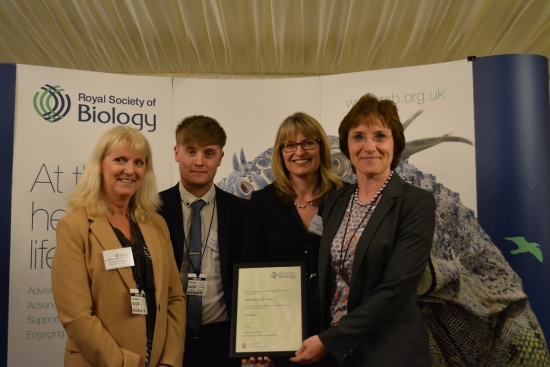 Image: Representatives from the University of Staffordshire.

The fourth annual awards, presented at the House of Commons on Thursday 14th April, recognised bioscience degree programmes which promote academic excellence, and prepare graduates for employment within the biosciences.

Nineteen high scoring graduates from accredited courses were also presented with the Top Graduate award. Top Students were also invited along to meet leading figures in academia and industry.

The annual awards ceremony, hosted by Nicola Blackwood MP and Stephen Metcalfe MP, was attended by representatives from industry and the academic community, as well as the Society's Member Organisations, many of whom contributed to the criteria for the Degree Accreditation and Advanced Accreditation Programmes.

Dr Mark Downs CSci FRSB, chief executive of the Royal Society of Biology, who presented the awards said, "We hope that through the Degree Accreditation and Advanced Accreditation Programmes, and the employer engagement work we have been doing, that we can add real value; to the individuals, the employers, and the UK economy, as well as inspiring more people to study the biosciences."

A variety of representatives from the bioscience industry were present; with thanks to MedImmune, Astrazeneca and Yakult who sponsored the event. Jacqui Hall, Vice President, Learning, Standards and Insights at MedImmune delivered the key note speech on the night.

Professor Chris Kirk FRSB, Honorary Secretary of the Royal Society of Biology Council presented Dr Liz Lakin, Senior Lecturer in Education at the University of Dundee with the President’s Medal in acknowledgement of her dedication and contribution to the Society, in particular as Chair of the Degree Accreditation Committee.