At the UK Biology Competitions (UKBC) Awards ceremony at the Royal Institution yesterday, Professor Dame Jean Thomas FSB, President of the Society of Biology, announced that the Society, in partnership with Warwick University will host the IBO in two years’ time.

Rachel Lambert-Forsyth, director of education and training at the Society of Biology said:
“The UK is a world leader in life science research and innovation and it is therefore very exciting to be hosting this prestigious competition in 2017.

“The Society of Biology champions a biology curriculum that stimulates and engages students with the natural world and the IBO is the pinnacle of recognising young biologist achievements beyond the school curricula.

“Biologists will go on to answer some of the biggest challenges facing the human race over the next decade and the students selected to represent their countries at the IBO will contribute to answering these challenges in the future.”

In bringing together gifted students, the IBO tries to challenge and stimulate students to expand their talents and to encourage their careers as scientists.

Every participating country sends four students, who are the winners of their respective National Biology Olympiad competitions. They are accompanied by two volunteer team leaders.

This year over 240 students, representing 62 countries, are taking part in the IBO which takes place in Denmark from 12th -19th July.

At yesterday’s ceremony this year’s UK IBO team, along with the other British Biology Olympiad medallists, received their awards and medals at The Royal Institution. 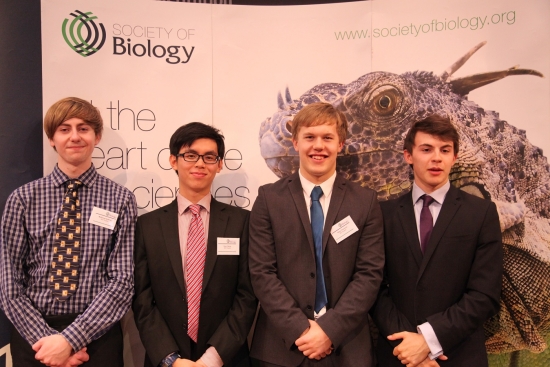 The UK teams have had considerable success at past IBOs, with UK students returning with medals consistently since first entering in 1998. The Biotechnology and Biological Sciences Research Council (BBSRC) continues to support the UK team's participation in the IBO.

The UK’s successful application to host the IBO in 2017 was made possible with the support of: AstraZeneca, Medimmune, Royal Commission for the Exhibition 1851 and the National Institutes of Bioscience.

UKBC also run the Biology Challenge, a mass participation competition, which aims to encourage all 13-15 year olds to take a greater interest in biology and the natural world.