The Society of Biology raised nearly £20,000 to support its charitable aims last night, as Sir David Attenborough Hon FSB captivated an audience of nearly 500 guests at the Science Museum in London. 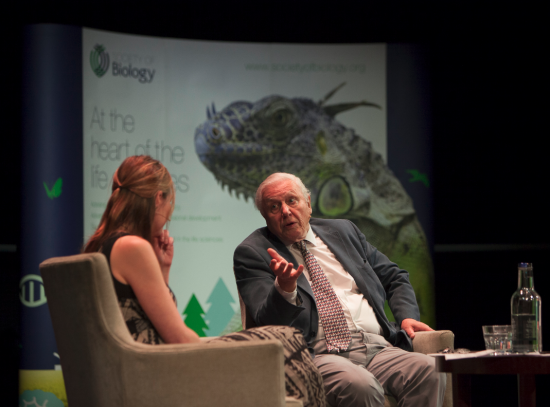 In conversation with TV paleopathologist Professor Alice Roberts FSB, Sir David spoke of the importance of natural history filmmaking in connecting people to the plight of the world’s biodiversity and climate.

“Over half the world’s population is urbanised and the thought that some children may grow up not looking at a pond or knowing how plants grow is a terrible thing,” he told guests at the fundraiser.

Sir David described how science broadcasting had changed since his career at the BBC began in the 1950s, when television was in its infancy. He said that natural history filmmakers benefited vastly from collaborating with scientists, improving the medium to the point where it had, on occasion, been able to inform biology itself.

“Television filmmakers would all acknowledge the fact they couldn’t do what they do without scientists. If you’ve got a project you go and find the scientist who is researching that species and they tell you all sorts of things. So from that point of view, the scientists and natural history filmmakers collaborating allowed us to make it more serious, scientifically.

“On the other hand we sometimes affect scientists, too… if you’re telling a story, it’s very tempting in television to personalise an animal and tell a little story. To start with biologists said this fascination with one individual is just television storytelling. But they began to realise that actually, that was a new way to understand behaviour – following the fortune of one particular animal could be very revealing and have all kinds of implications of the ecology and general behaviour of the animals in that area.”

After a wide ranging interview including questions from the audience, Sir David spoke of the urgency of various environmental concerns, especially ocean acidification.

“The thing that worries me almost more than anything is what is happening to the oceans. It is on the way to cause major, major problems of depopulation of fish stocks – and if you even just take the selfish attitude of what that does to human beings, it robs a vast number of people of their livelihoods and food.”

But Sir David did say that broadcasting had helped foster greater public understanding of such issues.

“Television has a responsibility to make sure there are a whole range of programmes. Overt programmes which talk about the dangers and what should be done must be there and are there. But they can’t be every week. At the same time you need programmes that are bringing the natural world to a whole range of people and get them interested – no one is going to care about protecting the natural world if nobody is interested.”

The evening ended with a prize draw and Sir David was presented with a pocket square illustrated with the nine extant species named after him. 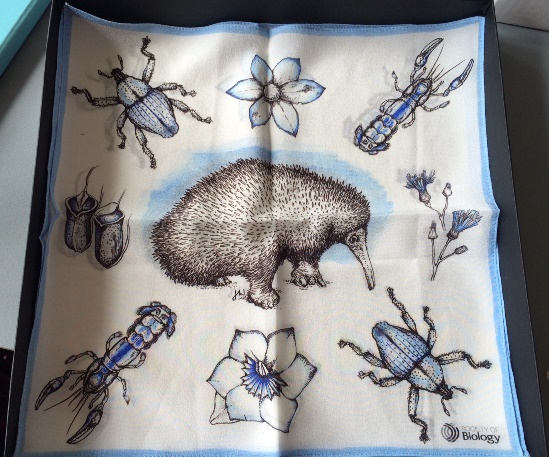 The Society offers a range of support for people working in the life sciences, and aims to inspire and inform all, about the wonders of biology. Read more about the Society’s work supporting the biosciences.