The RSB stand at New Scientist Live was buzzing from Thursday to Sunday last week as thousands of science enthusiasts asked members and Fellows of the Society their burning biology questions.

The RSB stand at New Scientist Live was buzzing from Thursday to Sunday last week as thousands of science enthusiasts asked members and Fellows of the Society their burning biology questions.

Twenty-four Society members engaged with the public from the RSB hub at the heart of the festival, which attracted over 20,000 attendees. 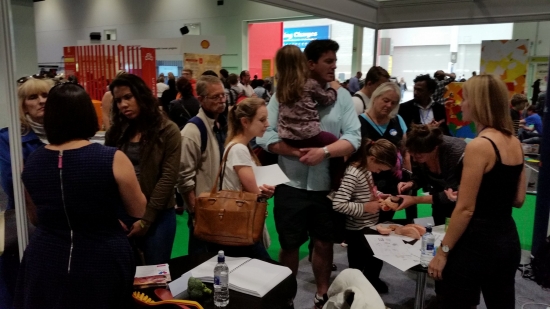 Visitors had the chance to touch coral from the Caribbean, while considering, ‘Why are coral reefs so important for everyone?’ with Professor James Crabbe FRSB from the University of Oxford. Many people also experimented with computer models of protein folding while asking Dr Arun Prasad Pandurangan MRSB from the University of Cambridge, ‘How could computers transform how we understand biology?’ 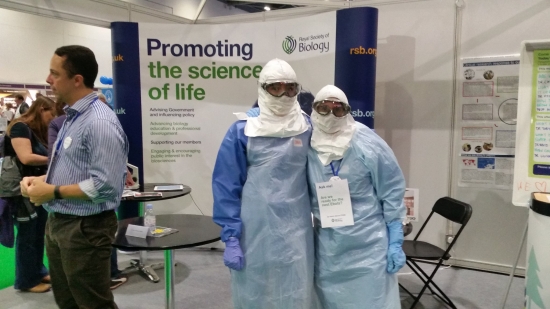 Some people tried on personal protective equipment as they discussed ‘Are we ready for the next Ebola?’ with Dr Catrin Moore FRSB from the University of Oxford, who reflects:
“Many of the visitors were put off by the strange person wearing all over body protection.

"Often the discussions began with me saying that I don’t think it will be Ebola next time, as we saw with the Zika virus. If it is Ebola, we don’t yet have a drug to cure the disease, although there is a vaccine which shows some protection. My group ran a clinical trial of an experimental drug during the Ebola outbreak, although we were very quick, our group wants the research response to be quicker.”

When asked 'Can humans smell sex pheromones' Dr Alfredo Sansone MRSB from University College London offered visitors the chance to smell different vials of putative human pheromones, explaining:
"We don't really know it yet. There are many candidate human sex pheromones, but none of them is widely accepted by the scientific community. So far the best candidate human pheromone might be in a secretion from lactating mother's nipples, which induces suckling in babies. However, human sexual behaviour is definitely more complex and further research is needed to find out if we smell sex pheromones."

Many visitors were also keen to talk to RSB staff about membership and get advice about careers from the professional scientists.

At the Brain and Body stage Dr Sheena Cruickshank from The University of Manchester discussed ‘Are we too clean?’

She explained, "There are lots of theories as to why we have more allergies. One of those is that the bugs that live in and on us have changed, we don’t necessarily get exposed to the right things when we’re young and our immune system doesn’t get trained, or it could be that we miss exposure to parasitic worms, which we don't have anymore."

The Society is working with Dr Cruickshank and The University of Manchester, along with the British Society for Immunology on the #BritainBreathing citizen science project. The public are tracking their seasonal allergy symptoms via the free #BritainBreathing app. Using these data, researchers hope to gain greater insight into factors affecting allergy symptoms and try to understand why allergies are on the rise.

Dr Cruickshank said: "There are between 7-8,000 more hospitalisations a year now than there were seven years ago. And many more people have allergies which they manage through self-medication. We don’t know why this increase is happening, because we don’t have enough data about how many people have allergies and when they experience symptoms.

"With #BritainBreathing we can look at what is happening around someone at the time they feel bad, in terms of the weather, pollens and pollutants, and we hope to start to unpick this complex picture."

You can listen to an interview with Dr Cruickshank from the festival on BBC Radio 5 Live (02:07).