The sunflower (Helianthus annuus) has won the title of ‘UK’s Favourite Flower’ in the Royal Society of Biology’s annual poll.

The poll was run as part of Biology Week 2018, and saw more than 4,200 votes cast for the preferred flower from a shortlist of 15. 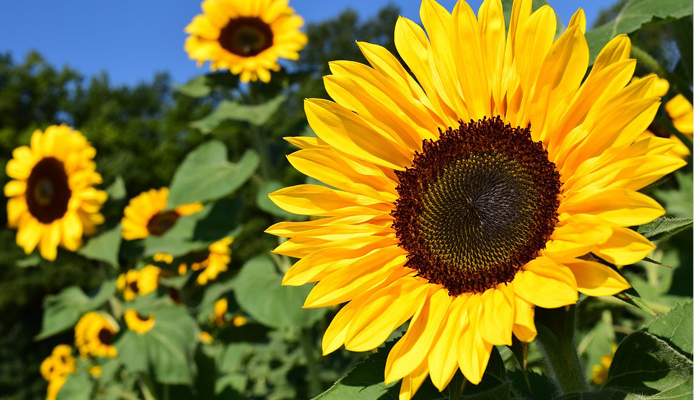 The flower won by only a slight margin, gaining over 27% of the public votes, with the poppy (Papaver rhoeas) coming in second with 23% of the votes.

Sunflowers have the ability to grow over 3m tall, with their flower heads growing up to 40cm in diameter. The black central disc of the sunflower is a pseudanthium, or composite flower, and is made up of many small flowers, called florets, to create the single flower-like structure.

The pseudanthium of the sunflower is particularly significant, as it has been used to produce a mathematical model relating to the golden ratio.

The UK produces up to 3,000 tonnes of sunflower seed each year, and is a popular component of bird food products. Sunflowers are one of the most important oil crops in the world, with one ounce of sunflower seed containing around six grams of protein and 14 grams of unsaturated and monounsaturated oils. When cold pressed and unrefined, sunflower oil is high in linoleic acid and vitamin E.

Sunflowers can be grown in a variety of soils although they prefer soil that is well drained, and this annual plant enjoys full sun. When sown in mid- April, they flower in August onwards,  and their seeds can be collected in Autumn.

Each of the 15 flowers in the shortlist were chosen with help from the horticultural team at the Royal Horticultural Society, for their environmental significance as well as their cultural and economic contributions.

This year’s poll was chosen to bring attention to the importance of flowers in the environment, and in society. Flowers are vitally important for maintaining wildlife populations as they produce nectar, a fundamental food source for birds, bees and other pollinating species.

In the last 70 years, 95% of meadows have disappeared due to an increase in housing construction and infrastructure installation, as well as an increase in crop diseases. As a consequence, this environment now covers only 1% of the UK, causing a largely negative impact on the abundance of the flowers featured in this poll.

The sunflower beat 14 other flowers to claim top place:

The annual poll aims to showcase important UK species to the public, fostering interest in biology and informing them on science and environmental issues.

Biology Week 2017 saw the Horse Chestnut tree (Aesculus hippocastanum) win the title of UK’s favourite tree with over 26% of the 2,500 votes.