Eric Greenwood CBiol FRSB has been awarded the Royal Society of Biology’s President’s Medal at his home in Cheshire, in recognition of his work with his local RSB branch.

Eric was presented the Medal by members of the North Western branch of the RSB, in his garden surrounded by friends and family.

Eric was originally selected for the medal back in 2020, but was unable to receive the award in person due to the pandemic. 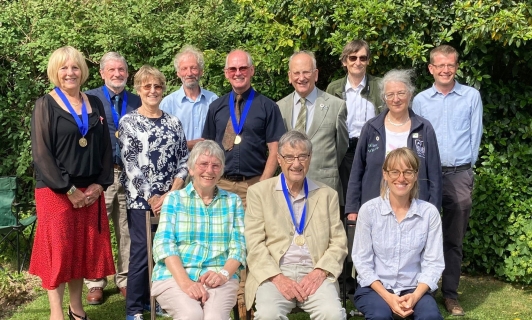 A keen botanist, Eric is the author of Hunting Plants and Flora of North Lancashire, the latter being an accumulation of systemic survey work of the region’s plants over the course of 46 years.

He previously worked as keeper of botany at the then Liverpool Museum, before retiring in 1998. Following retirement, Eric still remained an active member of the botanical community, and is currently a vice-county recorder for the Botanical Society of Britain and Ireland.

Eric has also been actively involved with the North Western branch since the nineties, volunteering as a committee member before being elected chair in 2000.

During his tenure, he hosted a wide range of events in partnership with local organisations including Ness Botanic Gardens and the Museum of Liverpool. More recently, he led several botanical surveys at Wrye Estuary Country Park as part of the branch’s outreach and engagement work.

Eric was nominated by Jean Wilson MBE CBiol FRSB, current vice chair of the North Western branch. She commented; “I would describe Eric as a gentleman biologist, always polite and completely professional.

“In his ninth decade, Eric is still passionate about committed to the natural world, and is a man for whom I have the greatest respect.”

Dr Mark Downs CBiol CSci FRSB, chief executive of the RSB, thanked Eric for his longstanding support of the Society. “I want to extend my warmest thanks for all the work Eric has done with the North Western branch.

“It is only fitting we recognise such outstanding commitment with one of our highest accolades, and I hope he and his family are very proud of his achievements.”