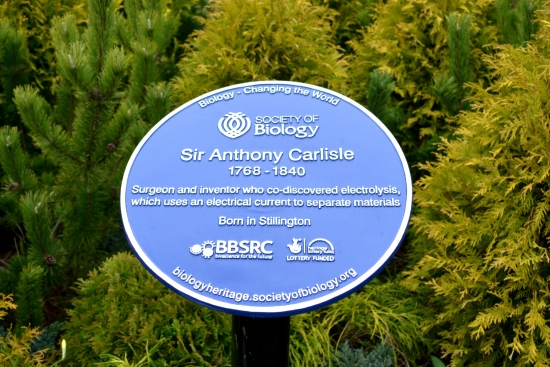 Sir Anthony Carlisle (1768 – 1840) was born in Stillington and went on to become a ‘universally esteemed surgeon’. He was President of the Royal College of Surgeons and physician to the Prince Regent (later George IV) and was knighted for his services.

Sir Anthony was a man of many talents: he co-discovered electrolysis; separating water into oxygen and hydrogen for the first time, using an electric current. It is also believed he inspired Mary Shelley’s novel Frankenstein.

The Society of Biology installed the plaque as part of a new series of ten blue plaques around the UK celebrating eminent but sometimes unsung heroes of biology.

At the unveiling ceremony, Dr Richard Spencer MBE, head of science at Middlesbrough College and shortlisted candidate for Global Teacher of the Year, made a speech:
“Sir Anthony was a universally esteemed surgeon and investigative scientist. But he was also well known for his stimulating conversation. His lectures on anatomy drew huge crowds thanks to his entertaining performances.

“He studied subjects as diverse as tapeworms, disorders of old age, prevention of disease and the bones of the inner ear. However, he is best known in science for the classical experiment with Nicholson in which water was dissociated into oxygen and hydrogen for the time, using electrolysis.” 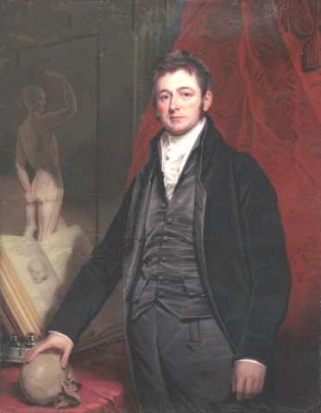 “Some evidence has recently been uncovered that Sir Anthony wrote gothic novels under the name ‘Mrs Carver’ and that he was the inspiration behind Mary Shelley's novel Frankenstein. Whether or not Sir Anthony was ‘The Real Dr Frankenstein’ is difficult to prove but I like to think so! Regardless, Sir Anthony was a truly remarkable individual and worthy of this blue plaque in commemoration of everything he achieved.”

Alex Cunningham, the MP for Stockton North, and Judith Turner, Chair of Stillington and Whitton Parish Council, also attended the celebration of this local hero.