Today a plaque celebrating Sir Richard Owen, inventor of the word ‘dinosaur’, was unveiled by the Society of Biology at Lancaster Royal Grammar School. 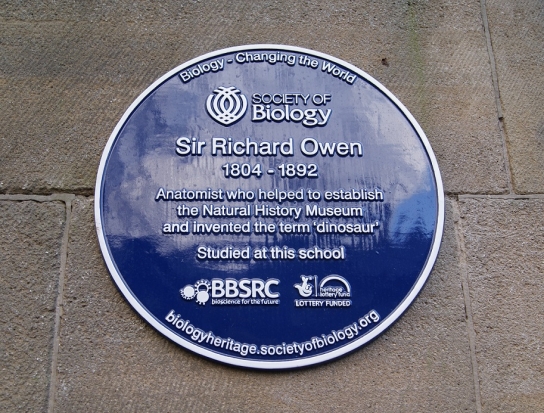 Sir Richard attended the local school from 1809 to 1819 and went on to found the Natural History Museum. The Society of Biology installed the plaque as part of a new series of ten blue plaques around the UK celebrating the eminent but sometimes unsung heroes of biology.

At the unveiling ceremony Dr David Williams, a fossil and algae researcher at the Natural History Museum, gave a speech:
“Richard Owen was one of the finest palaeontologists to have ever lived, describing many new vertebrates for the first time, including in 1824, the first dinosaur bones, to which he gave the name Dinosauria, meaning terrible lizard in Greek. Owen’s aim was not just to describe these and many other wonderful creatures, but to find a home for them all so that the general public would be able to appreciate their majesty. After a lengthy campaign, in 1881 the doors finally opened in South Kensington where the NHM still stands today, a testament to his persistence and ingenuity.”

The new series of celebratory plaques include those to: in Suffolk, Dorothy Hodgkin, who discovered the structure of Penicillin; Steptoe, Edwards and Purdy, IVF pioneers, in Oldham; and Dolly the Sheep, and the team who created her, in Edinburgh.