On Saturday 7th March a plaque celebrating Fred Sanger, the father of DNA sequencing, was unveiled at his former home in Cambridge. 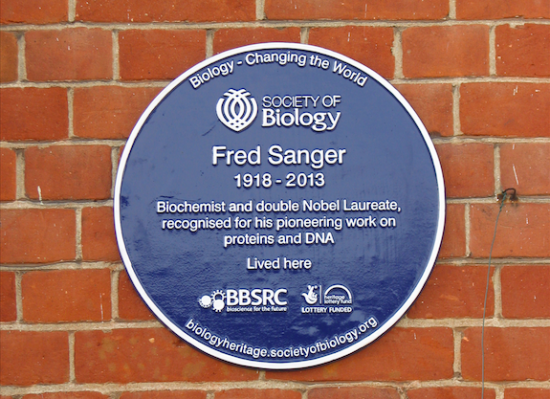 Sanger lived at 252 Hills Road for over 40 years, in which time he won the Nobel Prize for Chemistry twice: in 1958, for his work on the structure of proteins, and in 1980 for his work on DNA sequencing. He remains one of only two people to have won the prize twice in the same category.

The Society of Biology installed the plaque as part of a new series of ten blue plaques around the UK celebrating the eminent but sometimes unsung heroes of biology.

At the unveiling ceremony Professor Julian Parkhill FSB, head of pathogen genomics at the Wellcome Trust Sanger Institute, gave a speech:
"The work that Fred Sanger did was basic science - curiosity driven research. He was among the first to show that biology is defined by specific information encoded in genomes. However, the elegant techniques he invented to read that code have led directly to the genomics revolution, with enormous and still-increasing benefits for human health, agriculture, industry and the environment. Most fundamentally, Fred Sanger allowed us to read our own instruction set, and see, as individuals and as a species, how we are made and where we came from."

Sanger (1918-2013) was the first person to determine the chemical structure of a protein, namely insulin. This led to the production of insulin in a laboratory, and hence the treatment of diabetes. Sanger and his group later produced the first whole genome sequence. His techniques have led to the field we now call genomics and to research into tailoring medicines to an individual based on their unique DNA sequence.

Fred’s son, Robin Sanger, also gave a speech:
"My father, research biochemist, national treasure and double Nobel Prize winner lived here between 1939 and 1981. As my father I can say he was my hero. He cared for and comforted me, played with me, as well as advising and mentoring me through life's problems. But he was not just a hero to me, he was also a hero to his colleagues and fellow scientists who could learn from him and to the wide world at large which was to benefit from his discoveries in the field of gene sequencing. Like all heroes, he needed his own fortress of solitude to retreat to. At 252 he could relax and enjoy his reading, gardening, woodwork and many other hobbies whilst being able to enjoy his family's company and to continue with his research projects.”