Today a plaque celebrating Dame Honor Fell, ‘one of the leading biologists of the 20th century’, who made major contributions to our understanding of rheumatoid arthritis, was unveiled by the Society of Biology at Wychwood School, Oxford. 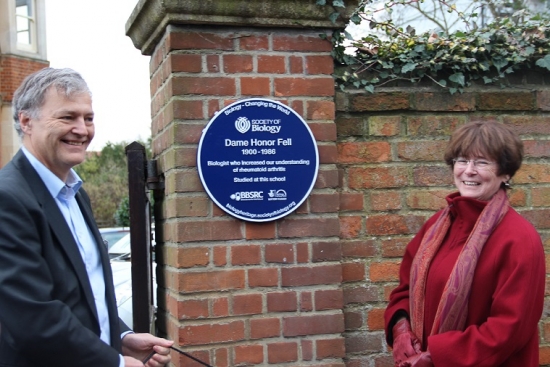 Dame Honor (1900-1986) studied at Wychwood School in the early 20th century and went on to develop the organ culture method, now a central technique of medical research, which allows scientists to grow living cells in the laboratory.

The Society of Biology is installing the blue plaque as part of a new series of ten plaques around the UK celebrating eminent but sometimes unsung heroes of biology.

At the ceremony Professor Doug Easton, co-director of Strangeways Research Laboratory at The University of Cambridge, where Dame Honor was director from 1927 – 1970, gave a speech:
“Dame Honor Fell had a remarkable career as one of the leading biologists of the 20th century. Her major research contribution was the in the development of methods for organ culture, allowing the biology of cells to be studied without risking human organs. Such techniques have been central to much basic medical research and a forerunner of stem cell research today. She applied her methods in particular to studying bone and cartilage, and the role of the immune system in rheumatoid arthritis.

“She was director of Strangeways Research Laboratory in Cambridge, for more than 40 years, taking it from a small laboratory to a major medical research institute. One of her major contributions was to offer research facilities to scientists who were refugees of the Second World War. The laboratory pioneered the development of radiobiology, studying the effect of X-rays on living tissues, which was of fundamental importance to the development of radiotherapy for cancer. She was also responsible for giving a research position to Francis Crick, six years before he discovered the structure of DNA with James Watson.

“In her lifetime she received many awards for her work, most notably being elected Fellow of the Royal Society in 1952, only the 9th woman to be elected to the Society, and being made Dame of British Empire in 1963. Her legacy, both her research achievements and her ability to inspire future generations of scientists, has been immense.”

Professor Kate Beckingham, a former PhD student of Dame Honor, who is now professor of biochemistry and cell biology at Rice University Texas, also gave a speech:
“At a time when very few women entered science, Dame Honor was a pioneering figure and, once established in her career, she provided inspiration and support to hopeful young women scientists-in-training like myself. Despite her duties as the director of Strangeways Laboratory, she remained a “hands on” researcher all her life. I deeply admired the enthusiasm and skill brought to her experiments and the self-discipline and commitment she showed in her work. I felt like an apprentice learning from the hand of a master craftsman.”

Lord Mayor of Oxford, Councillor Mohammed Abassi, also said a few words at the celebration of this local hero:
“It always gives me great pleasure to know that someone who went to a local school went on to make such a difference to scientific discoveries. Dame Honor Fell’s achievements are well respected, she is to be much admired and remains an inspiration to today’s students.”