The Royal Society of Biology joins the family and friends of Dr Barbara Knowles in sadness at her death and in celebrating her life. 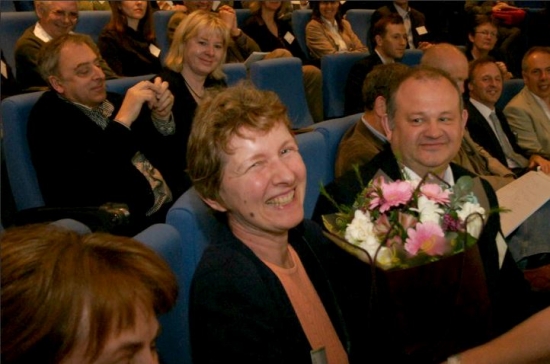 Barbara lived a committed, creative and courageous life as a scientist working to conserve biodiversity and communicate the value of the natural environment. She had a wide circle of good friends and colleagues in several countries and is greatly missed by them and by her family. Born in Surrey, Barbara attended Croydon High School, and then studied biochemistry at Girton College, Cambridge, where she also gained her PhD. Her post-doctoral research at Clare Hall, Cambridge was supported by a Royal Society Research Fellowship and investigated the workings of biological insecticides. She then moved into the field of public science policy and communication at the Natural Environment Research Council, the Office of Science and Technology and the Institute of Biology.

She became interested in Transylvanian pastoral ecology in 2008 and later that year, learning that she had Motor Neurone Disease, she began to devote her time, personal resources and professional expertise to promote sustainable development in the Pogány-havas region and beyond. She worked with the Pogány-havas regional Association, local volunteers and experts to develop environmentally-informed social enterprises and to record and protect valuable local flora and fauna. She established the Barbara Knowles Fund and supported a suite of activities working with schoolchildren, farmers, international and national academics and policymakers. Combining her voluntary work in Transylvania with continued work for the Royal Society of Biology (RSB) she both drew international experts to the region and informed experts and non-experts in the UK, and provided an inspirational example of leadership in pragmatic environmentalism.

Barbara helped to facilitate three symposia at the EU Parliament in Brussels focusing on High Nature Value Farming (HNV) and pastoral woodlands, and helped to found the Romanian HNV Coalition. Her work with others led to the designation of a new Natura 2000 site at Muntii Ciucului in the Eastern Carpathians. She initiated micro-initiatives in tourism and food production based on local traditions and resources with the aim of supporting local enterprise. Her passion for Transylvania’s cultural and natural diversity was shared by HRH Prince Charles who on his most recent visit helped to launch recording of the Remarkable Trees of Romania.

With colleagues Barbara established a unique academic and practical symposium series with published reports and international sponsors that has held five meetings. In these ways she brought the experience gained by being an academic, developing communication and outreach at the Natural Environment Research Council, leading public engagement and cross-Whitehall initiatives on science and society issues for the Office of Science and Technology of the Department of Trade and Industry, and senior leadership in policy at the Institute and later the RSB to new and challenging environments.

Barbara brought awareness of this new work to many in the UK, through her founding leadership in the Natural Capital Initiative and through her extensive network of contacts and friends. She initiated and edited the science policy newsletter of the RSB reaching many thousands of readers interested in biology every week. She was awarded her MBE in the 2014 New Year’s Honours List for Services to Science Communication and the Environment and was recently nominated for the European Citizen’s prize of the European Parliament by Romanian and UK MEPs.

Barbara had become a recent convert to online courses completing several in swift succession on food security and environmental management and no doubt others also. Her clarity of vision brooked no argument on matters of equality, diversity and human rights and she increasingly discussed matters of disability policy. Barbara’s voice always rang true, her opinions and positions were well thought out and consistent and she patiently and persistently communicated them to persuade others. Not always with success but always with positive impact. In all this she succeeded with grace, despite increasing obstacles of immobility and failing strength. Her personal bravery, sense of humour, intellectual rigour and undaunted enthusiasm for practical environmentalism were a moving inspiration to all who knew her, and hopefully to the continuing circle of those who encounter and learn about her legacy.

Recent blogs about Barbara and her work:
Europe's wood pastures condemned to a slow death by the CAP?
2013 Science Policy Highlights
The meadows of Transylvania - a biodiversity hotspot
Treasures of Transylvania
Transylvania Hay