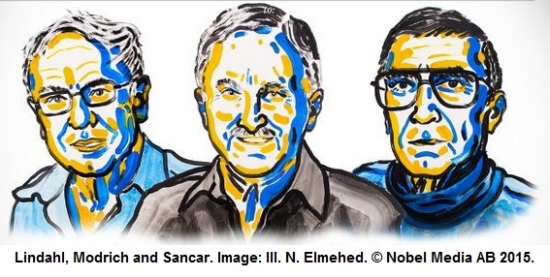 Dr Mark Downs CSci FRSB, chief executive of the Royal Society of Biology, said:
“The structure of DNA and its function in the inheritance of almost all living organisms remains one of the critical discoveries in science. Almost everyone has heard of DNA. But the way it functions in every cell and how it interacts with other molecules is still being actively researched and continues to reveal how amazing and complex the start, and continuance of life, is.

“The important work of Lindahl, Modrich and Sancar has provided an answer to one part of this puzzle – how DNA repairs itself when damaged, every day, through processes within each cell. Without these mechanisms we would probably not exist and would certainly all die young. The Royal Society of Biology is delighted to be able to congratulate this year’s recipients of the Nobel Prize in Chemistry.”

Every day our DNA takes a barrage of damage from external sources: UV radiation, oxidative free radicals and carcinogenic substances. DNA damage also occurs naturally within our cells when the chemical structure is altered in some way, be it from a break in one of the strands or a mismatch of base pairs. Not to be confused with DNA mutation, DNA damage is purely physical and results in an abnormal chemical structure, which fortunately, unlike mutations, can be repaired.

Lindahl, who is now based at the UK's Francis Crick Institute, discovered that DNA is a highly unstable molecule, decaying at a rate that ought to have made the development of life on Earth impossible. He is credited for describing base excision repair, a process important in the removal of damaged bases that could otherwise cause the collapse of our DNA during replication.

Sancar’s discovery of nucleotide excision repair, shows how the cell can counteract the consequences of UV radiation damage, and other mutagenic substances, such as from chemicals found in cigarettes.

Mismatch repair, identified by Modrich, reveals that our cells can ‘proof-check’ themselves as this system recognises mistakes initially made during replication and corrects them. All of these repair systems ensure our cells maintain genomic stability.

This trio of scientists have provided a fundamental insight into how our cells function, knowledge that will be of great benefit to human health: in the development of cancer treatments, in helping us unlock the process of ageing and allowing us to gain a deeper understanding of hereditary diseases.

The Nobel Prizes have been awarded every year since 1901 as a result of the lasting legacy of Alfred Nobel, the Swedish inventor of dynamite explosives, who left a large sum of money to reward individuals who have made a significant contribution to mankind. This can be either scientific or social, and winners are recognised for what is often a lifetime’s work.