The newly appointed Minister of State for Universities and Science, Jo Johnson MP has said that developing collaboration between academia and business will be among his main priorities during the next parliament. 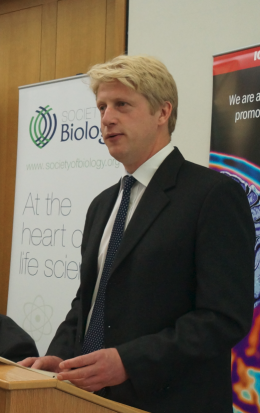 Johnson addressed over 200 MPs and representatives from the science community as part of Parliamentary Links Day, an annual event organised by the Society of Biology, which aims to strengthen dialogue between scientists and politicians.

In one of his first appearances since being appointed to the role in May, Johnson admitted that he was 'no science buff at school' but had been 'putting in the hard yards' to visit the UK’s wealth of science and engineering centres and get to grips with his brief.

He welcomed the fact that there was strong cross party consensus for investment in science and said that science ran through the Conservative party’s manifesto – which he helped to write – 'like through a stick of rock'.

He reiterated the Government’s commitment to investing £6.9bn in science infrastructure capital by 2020/21, and set out three 'themes' that he said will be priorities for his department. These include the acceleration of collaboration between universities and businesses, 'making the most' of the UK’s scientific expertise and output, and ensuring the UK nurtures the best scientific talent in the world and continues to inspire others into science and engineering careers.

The event’s other panellists and speakers discussed the value of science to the UK Government, and how to ensure the UK science remains world-class as emerging nations pour billions into their scientific research programmes.

Johnson’s shadow minister, Labour’s Rt Hon Liam Byrne MP, called for cross party consensus on the need to spend 3% of GDP on science, a level of funding achieved by countries including Germany and Korea.

He said that the next decade 'will be the most extraordinary in the history of science' as the world’s population becomes increasingly urbanised and connected to the cloud, and attempts to keep global temperature rises under 2°C. 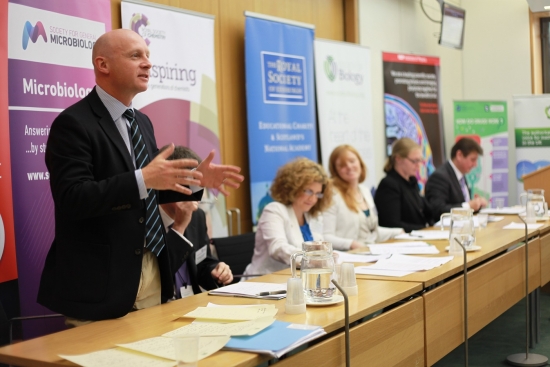 He called for the development of a technical education system that would allow students on vocational courses to stay in education up to degree-level, and for a consensus on the free movement of students and scientists.

“We are a small island and the future powerhouse of science will not be on these shores. We need to be interconnected with the countries spending hundreds of billions on scientific research.”

He also said that ring-fencing the science budget was 'helpful but meaningless political jargon' and that in real terms funding for science in the UK was falling.

After a wide ranging panel debate, the new chair of the House of Commons Science and Technology Select Committee Nicola Blackwood MP spoke of the 'heavy responsibility' of her new role.

“The more difficult the decision the more important it is to have the backing of the science community. I will do everything I can to ensure that happens.”

Closing the event, the President Elect of the Royal Society Sir Venki Ramakrishnan said that private investment in science was closely linked to government investment, and called for further science spending and reform of immigration policy.

Watch the keynote speeches on our blog.

See the best photos from Links Day in our Facebook album.

See how #LinksDay2015 was covered via social media by reading the top tweets on our Storify.

Read a blog post on the event by James Borrell, NERC funded PhD student and science policy intern at the Society of Biology, on the Society blog.