The national Starling Survey, which aims to solve the mystery of starling murmurations, is being re-launched today to build on the information gathered last year.

The Royal Society of Biology and the University of Gloucestershire are again calling on the public to record where and when they see starling murmurations occurring as well as the number of birds involved and the duration of the display. This year, there is a particular focus on predation, with people being asked to record whether or not there was a predator such as a bird of prey in the area and, if so, what it was doing.

People can record starling murmurations throughout the winter until early 2016. The citizen science survey takes less than a minute to complete and the scientists are especially keen to have multiple records from the same sites, as well as one-off sightings. 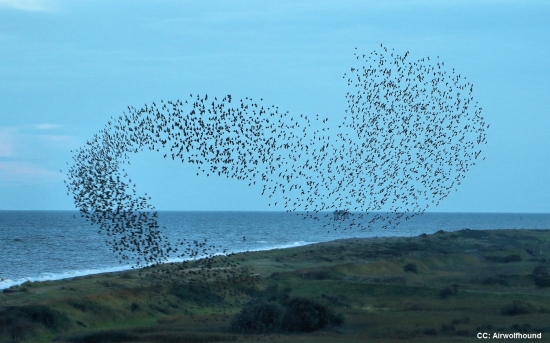 Starling murmurations occur when many individual birds gather together and fly as a group to form swirling aerial patterns in the sky. Sometimes called 'the ballet of the skies', this biological phenomenon is very poorly understood.

Starling numbers have declined alarmingly - since the mid-1970s the UK population has fallen by 66%. The starling is now red listed in the UK as a bird of immediate conservation concern. The cause of the starling decline is thought to link to habitat loss and reduction in food, but much is unknown.

In 2014, the Royal Society of Biology and the University of Gloucestershire teamed up to try to answer some of the many questions surrounding the mystery of starling murmurations. Over 1,600 sightings revealed some interesting results about location and duration of murmurations. This autumn they are calling on the public to send in more specific information in order to discover more.

Ornithologist Dr Anne Goodenough MRSB, from the University of Gloucestershire, and her colleagues will analyse the data to find out how environment, weather, and predators affect the size, frequency and time of murmurations.

Dr Goodenough said: “It has been suggested that starling murmurations occur because starlings gain safety in numbers, confusing potential predators such as birds of prey before settling down to roost. Another theory is that they could be gathering to keep warm or exchange information. However, despite starling murmurations being an incredible spectacle, the biology of murmurations remains little studied. This study will harness people power once again to further increase knowledge about this amazing phenomenon.

"Thanks to those who took part in last year’s survey, we found out lots of key information. These records gave us an excellent insight into where murmurations take place. Sightings came from all over the UK: as far south as Penzance in Cornwall; as far north as John o'Groats; as far east as Lowestsoft in Suffolk, and as far west as Ballymoney, County Antrim. We were astonished at the number of murmuration sites, and how well spread they were over the whole of the UK.

"Murmurations were recorded over a whole range of habitats, including typical wetland and farmland habitats, but also over the sea in places such as Brighton, Blackpool and Aberystwyth, in city centres such as Belfast, over London parks, and in industrial areas such as Port Talbot in South Wales. They were seen from homes, gardens, offices, schools, shop car parks, hospitals, nature reserves and even by people driving along the M6 motorway!

"We also got some basic insights into what happens in murmurations - including the fact that some murmuration events last well over an hour, which was much longer than we had anticipated.”

“By gaining a better understanding of starling behaviour, and current UK numbers and distribution, we may be able to help protect them”, Dr Goodenough said.

Jon Kudlick MRSB, director of membership, marketing and communication at the Royal Society of Biology said: “As well as the continued success of the Starling Survey, our recent Flying Ant Survey and House Spider Survey have received thousands of records over four years and shown how effective citizen science can be in gaining insight into the mysteries of the natural world.”