Biologists and non-biologists of all ages packed into the historic Faraday Theatre at the Royal Institution last night to hear a panel of experts tackle the question: Marine plastics: is it too late to save our oceans?

The debate, organised by the RSB in partnership with the Biochemical Society and the Royal Institution, was the second major environment-themed RSB event of Biology Week 2019, following a discussion on insect declines on Monday.

The audience first heard from chair and environmental journalist Gaia Vince that 300,000 tonnes of plastic is produced every year; that just 20% is recycled or incinerated; and that much of the rest has spread through our ecosystems – some of it even now entering our own bodies as microplastics. 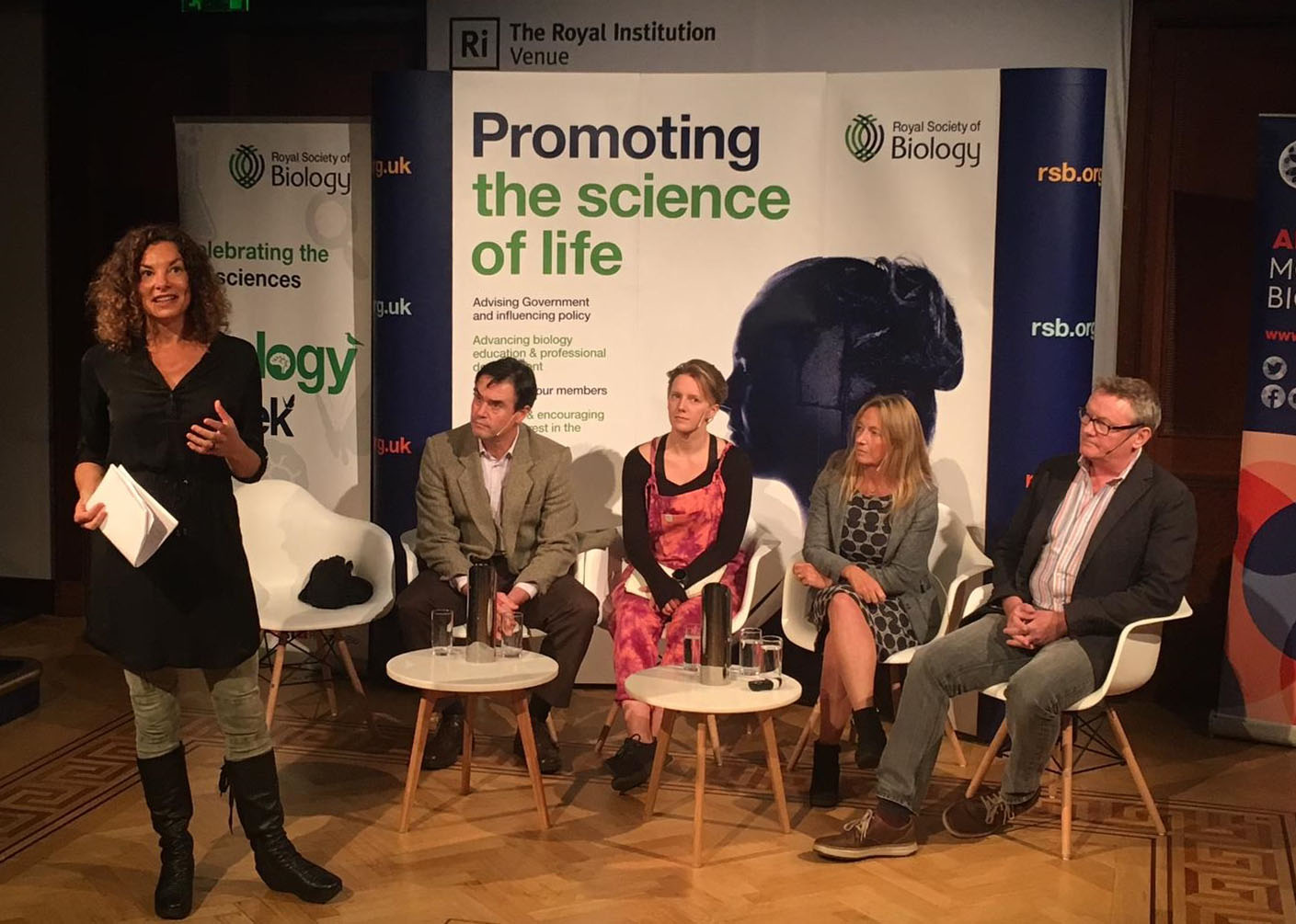 “As these organisms are the link between the ocean’s primary producers and the rest of the marine food web, that is of direct relevance to all marine communities,” she said.

Dr Anna Ploszajski, materials scientist at the Institute of Making, UCL, defended plastic as a material, saying that the problem was consumers throwing away what should be viewed as a valuable resource.

She said societies need to move towards circular economies, where materials and waste are continually reused or re-enter the economy in different forms. “As consumers we really need to start saying it is not good enough that my iPhone only lasts two years, or my washing machine only lasts five years.”

David Jones on the perception of value of single use plastics

David Jones, an underwater cameraman and founder of the Just One Ocean campaign, agreed that a huge part of the problem was that people’s perception of the value of single-use plastics was “zero”.

“We need to change the perception that if you buy a product the plastic hasn’t cost you anything. When you buy a bottle of water, the bottle is worth about 500 times as much as the stuff in it, and yet we chuck it away. It’s bonkers.”

Addressing the central question of the evening – ‘is it too late to save our oceans?’ – there was optimism despite the scale and complexity of the problem. Several potential solutions were discussed, from pyrolysis (recycling using high temperatures) and bio-remediation to ‘modular’ products with replaceable parts and levies on plastic manufacturers.

Marine organisms’ natural ability to process particles in seawater could even be used to filter microplastics out of water, said Lindeque. “A one-metre-squared patch of mussels can filter around 150,000 litres of water,” she said. “They could potentially be used as filters in especially sensitive habitats,” she said.

But several members of the panel expressed concern that some fears about plastic, and proposed solutions, aren’t currently supported by evidence.

“Unfortunately the science takes time,” said Professor Lindeque. “It’s good that the public is now with us…but the action we take must be strategic and based on good information.” 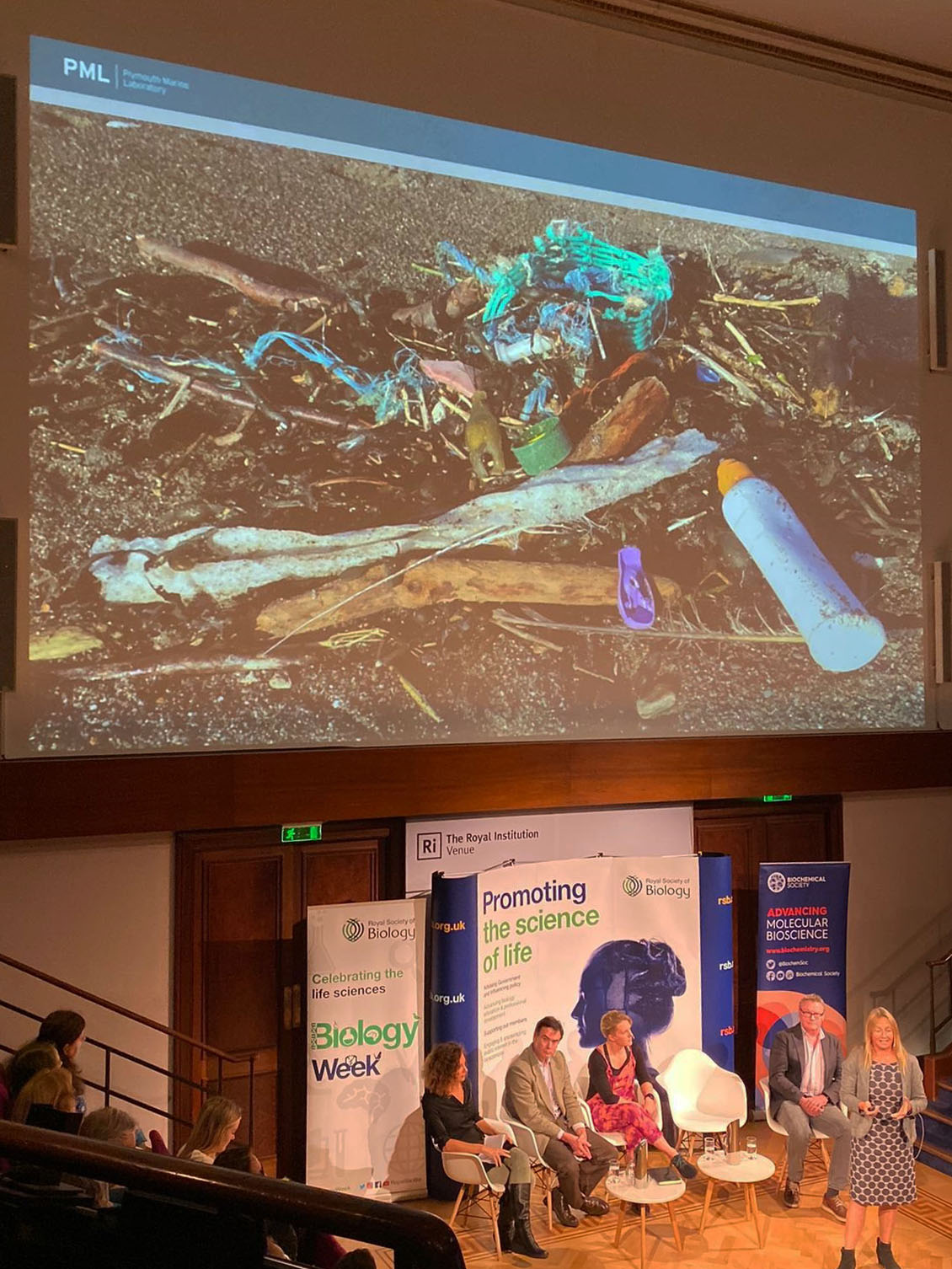 Professor Ted Henry, an environmental toxicologist at Heriot-Watt University, said that while marine organisms do readily ingest microplastics into their digestive tracts, there was little to no evidence that the plastics cross membranes and accumulate in cells.

In terms of the dangers of eating microplastics in seafood, “you will have eaten far more plastic from the fibres and particles of plastic in the air in your house than through seafood,” he said. Additives or toxic chemicals that tend to stick to plastic are not necessarily released into tissues, he said.

“We have to be careful about overstating the effects,” he said. “What if the energy we spend trying to remove plastic from ecosystems is even worse than the problem?”

Ploszajski, meanwhile, suggested that new ‘bioplastics’ and other alternatives to plastic could actually have an even worse impact on the environment due to the greenhouse gases released by their production or degradation.

Jones, who has been campaigning about the issue of marine plastic since 2009, argued that due to the complexity of the problem, and the number of stakeholders involved in policy decisions around plastic, societies face “consultation overload” which just increases the time it takes to enact change.

“During times of war, governments just take action because they need to act quickly,” he said. “There’s almost now an argument that this is an emergency, and governments should say we have just got to do something about this, now.” 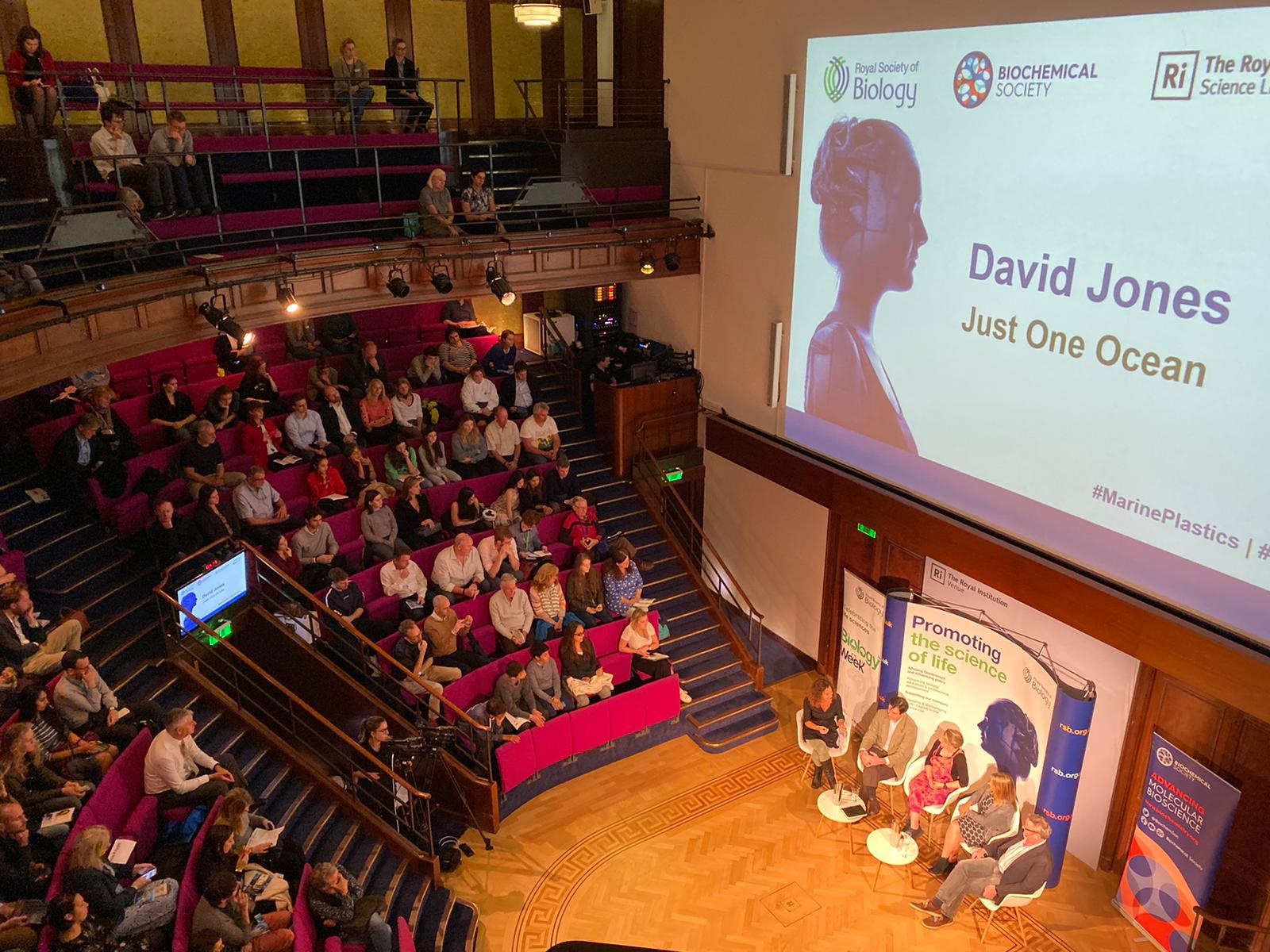 The Faraday theatre played host to the event

Jones received applause from the audience for his view that plastics manufacturers should be held responsible for the problems their products are causing. “There is a reason you don’t see plastic bottles on the floor in Germany, and that’s because they are worth 25 cents each. That system is paid for by the people who make the plastic. They’ve been doing that since 1992! It’s time we caught up.”

The panel agreed unanimously that plastics should not be banned outright. “We need a plan that invests in the science, educates people, and invests in alternatives,” concluded Jones.

The debate was live streamed on the RSB website and you can watch the debate online. You can view our twitter moment of the event online.