Each autumn the number of spiders seen indoors suddenly increases as males go on the hunt for a mate. The Royal Society of Biology is giving the public the opportunity to learn more about the spiders that will be in their homes in the coming months.

Their free app ‘Spider in da House’ is available now in the Android and Apple app stores. Using photos, identification tools, and further facts, the free app allows people to identify and learn more about 12 of the most common spiders found inside homes. 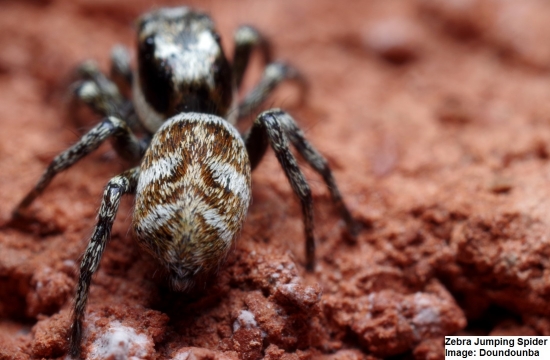 Professor Adam Hart FRSB, professor of science communication at the University of Gloucestershire said: “We’ve been running a survey of house spiders for a couple of years and mid-September through to mid-October is the height of ‘spider season’. We’ve had another good summer which means we might be in for another good year for large spiders (or a bad year if you aren’t a fan!)”.

There are approximately 660 species of spider in the UK, and according to the preliminary results of the Royal Society of Biology’s recent House Spider Survey, the public struggle to differentiate between spider species and sexes.

Users might be lucky enough to spot the giant house spider Tegenaria gigantea. One of largest species of spiders in the UK, people used to eat them (and other house spiders) to combat fever.

If giant spiders aren’t your cup of tea then how about jumping spiders? In the UK jumping spiders are often found on the walls of houses. A very common type is the zebra jumping spider (Salticus senicus); easily recognised by the distinctive black and white stripes on its abdomen. Despite their frightening name, they are small, rather beautiful and like most spiders, completely harmless.

Although not loved by many “spiders are very important ecologically” says Professor Hart. “They are diverse and common, and as a predator they are crucial in maintaining the biodiversity of our gardens, woodlands, field margins, hedges – in fact pretty much everywhere.”

The app also helps users to identify whether spiders are male or female.

Unlike in most mammals, female spiders are often larger than males. In Tegenaria spiders, which are the big spiders we most commonly call ‘house spiders’, males are readily distinguished from females because males have what look like a pair of long thin ‘boxing gloves’ protruding from the front of their head end. These pedipalps, often just called palps, are used to transfer sperm into the female.

Both sexes remain in their webs, most commonly in sheds, garages and wood piles, until the autumn when the males become nomadic and search for females. This often leads them indoors where we encounter them in our baths or running from beneath our sofas.

Females usually stay in their webs to await a suitor. After a male has found a female's web he will stay with her for a number of weeks, mating with her repeatedly. The female then overwinters with stored sperm, and the next spring she can produce more than 10 egg sacs, each containing around 40 to 60 eggs.

The ‘Spider in da house’ app is a collaboration between the Royal Society of Biology and the University of Gloucestershire.