Hundreds of outstanding pupils were recognised for their competition success at this year’s Education Awards Ceremony, which took place at the IET London: Savoy Place on Friday 7th July.

The ceremony saw more than 200 school students receive their certificates and medals for their achievements in the Biology Challenge, the Intermediate Biology Olympiad and the British Biology Olympiad. 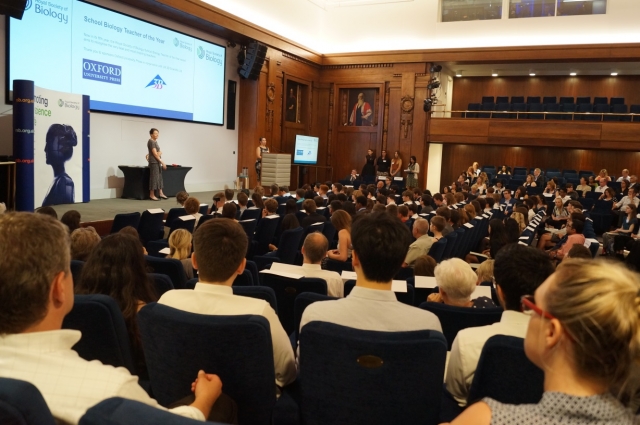 The 2017 Secondary School Biology Teacher of the Year award was also presented to Leah McClure from Colton Hills Community School, Wolverhampton. Leah, who has been teaching biology for the past seven years, received a cash prize of £500 and Oxford University Press resources for her school valued at £500 too. 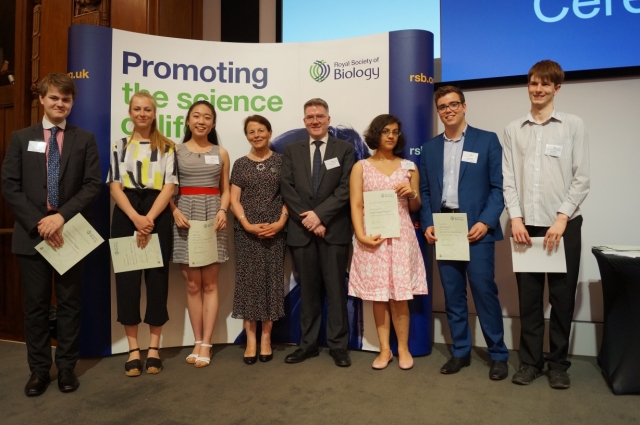 Leah said of winning the award: “I am genuinely honoured to have won this award. I am incredibly lucky to have taught a multitude of amazing students, many of whom have inspired me on a daily basis, and to work alongside fantastic colleagues.”

Schools that received the highest number of gold medals in this year’s British Biology Olympiad were also announced.

The top school in Northern Ireland this year was Portadown College in Armagh, in Wales it was Cardiff Sixth Form College in Cardiff, for Scotland it was The High School of Glasgow in Glasgow, and the top school for England and overall was Queen Elizabeth’s School, Barnet. 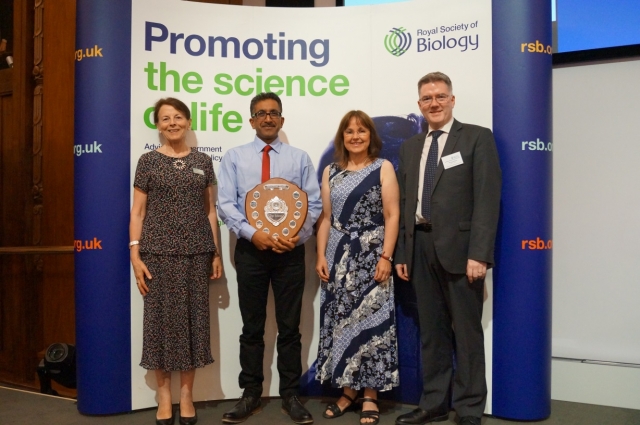 Professor Dame Jean Thomas, President of the RSB (left), with representatives from the Overall Top school for the British Biology Olympiad and Dr Andrew Treharne, Chair of UKBC

Professor Tim Birkhead FRS, a previous winner of the HE Bioscience Teacher of the Year Award, delivered the keynote lecture about his ongoing research on guillemots, which was warmly received by the audience.

Salvador Buse, a member of last year’s UK International Biology Olympiad team and now an undergraduate at Cambridge University, also delivered a humorous address on his experiences in the competition, including hints and tips on what this year’s team should expect at the IBO taking place at the University of Warwick later this month.

Rachel Lambert-Forsyth CBiol CSci FRSB, director of membership and professional affairs at the RSB, said of the event: “The annual Education Awards Ceremony showcases the talent our young biologists possess not just here in the UK but across the world, and it is very encouraging to see more and more students each year engage with our competitions and demonstrate their enthusiasm and passion for the subject.

“I would also like to congratulate not only our student medal winners, but those teachers who engage and enthuse this generation of students through their hard work, dedication and love of the subject. We were delighted to recognise and celebrate them also today.

“We’re now very much looking forward to the International Biology Olympiad, and are excited to see young bioscientists from across the world come together here in the UK and again demonstrate their enthusiasm and acumen for biology.”