The Matter of Life

‘Active matter’ is the term given to systems containing large numbers of self-propelling units or creatures – from motor proteins in a cell to flocks of birds. Physicist Sriram Ramaswamy tells Tom Ireland about his influential work on the properties of active matter, and how physicists and biologists can work better together

Professor Sriram Ramaswamy FRS is a professor of physics at the Indian Institute of Science, Bengaluru. With an interest in hydrodynamics and biological physics, he helped to found the emerging field of ‘active matter’: the study of systems whose components move under their own power.He is widely known for formulating equations governing the alignment, flow, mechanics and statistical properties of suspensions of self-propelled objects, from subcellular scales to collections of organisms.

Ramaswamy says us this approach is already contributing, thanks to the efforts of many groups, to a greater understanding of a range of biological phenomena, from cytoskeletal mechanics and organisation to cell division, cell motility, tissue homeostasis, morphogenesis, and collective behaviour. He was elected a Fellow of the Royal Society (FRS) in 2016.

Can you tell me how you define ‘active matter’ and what kinds of biological systems can be described as active matter?

Active matter is a way to group all systems whose component parts are self-driven, that is, they convert fuel, internally stored or ambient, into movement.

The idea is to bring living matter into the fold of condensed matter physics – the study of the macroscopic states of matter, such as solids, fluids, liquid crystals, magnets, metals, insulators and superconductors – while keeping in mind its special features.

Living matter has many special features, and active matter incorporates only one of them: metabolism, in a broad sense.

For a long time, the favourite kinds of active system for physicists were flocks, swarms and the like, or, on a subcellular scale, cytoskeletal filaments animated by motor proteins fuelled by ATP, but the canvas is wider now.

The term applies to any biological or artificial system, material or construct that carries out sustained conversion of chemical or other energy into movement: life is active.

Your research helped found the field of active matter. How did you come to be interested in this kind of system?

Like so many physicists, I am excited and intrigued when order appears, unbidden, in collections of objects, living or dead – not only textbook examples, like crystalline lattices, but macroscopic manifestations, like stripe patterns in clouds or sand ripples.

It was natural to wonder if equations on the hydrodynamics of liquid crystals, like those I had worked on for my PhD, could be modified to apply to living examples of liquid crystalline order, like fish schools.

My initial foray into this class of problems was a theory of fluctuations and instabilities in fluid membranes internally driven by ion pumps. Then flocking models made their appearance, and I noticed that they were based on behavioural rules for alignment and motion, but ignored the fact that such decisions and moves might have to take place in a fluid medium, where they would have to deal with physical laws like momentum conservation.

That prompted us to work out the hydrodynamics of a self-propelled liquid-crystalline suspension, with rather surprising results.

What did you find?

Two findings from our early work were that firstly, microbes can't swim in the same direction in a large group even if they try: a coherently swimming state is intrinsically unstable for purely fluid-dynamical reasons. Secondly, the mere presence of swimming activity can increase or decrease the viscosity of a fluid. A suspension of E.coli is less viscous, and a suspension of Chlamydomonas more viscous, when they are alive and swimming than when they're dead. Experimenters were surprisingly willing to test these weird ideas, and found we were right. 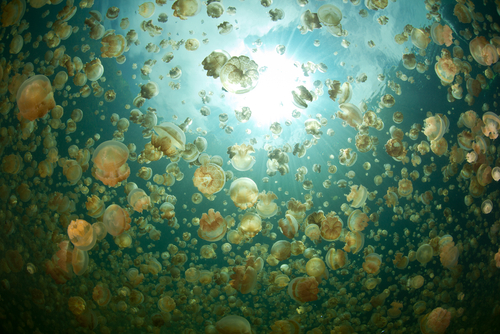 Motile bacteria, cells in tissue, and swarms of animals such as jellyfish can be seen as ‘living liquid crystals' by those studying the dynamics of matter.

Had physicists avoided studying these kind of questions before because these systems were alive, and therefore too unruly, or because it was seen as the domain of biology?

I don't think so. Mathematicians, chemists, engineers and physicists have long studied self-organisation in the living world on scales from subcellular to oceanic. There is also a great fluid-mechanics culture around the physics of swimming organisms.

A lot of the work has been on pattern formation in time, space or both, but without a central role for the laws of mechanics. Into this culture of modelling patterns in biology, active-matter researchers brought the machinery of the non-equilibrium statistical physics of condensed matter – especially liquid crystals. This helps us understand what allows ordered structures to stay ordered, and what structures can emerge to disrupt order as you change a control variable.

One reason why the field grew so fast after inception was the natural connection to the parallel interest of physicists in molecular motors and the cytoskeleton. Another was synergy with the tradition of microbial hydrodynamics.

Can you tell me a bit about the non-living or synthetic active matter you use to test your theories about swimming organisms?

For some purposes, it is useful to take an ‘essentialist’ view of active systems, namely: it doesn't matter what the system is made of; all that matters is that the constituents are all independently in contact with a maintained supply of energy, like bacteria in a bath of nutrient – and are equipped to turn this energy into systematic motion.

We have studied theoretically the motility and ‘sensing’ behaviour of suspensions where particles propel themselves with a partial coat of catalyst which breaks down a chemical in the ambient medium.

In another study, we subjected a monolayer of thin copper or brass rods, about half a centimetre long and a millimetre in diameter, to sustained vertical vibration of the horizontal solid surface on which they were strewn.

Some of the rods were polar, ie tapered at one tip, and others apolar, symmetrically tapered at the two ends. The polar rods proved, satisfyingly, to be motile, and converted the ‘nutrient’ energy of vibration into motion on the surface in the direction of the narrow tip.

At higher coverage the polar particles moved quite persistently and eventually formed temporary co-moving associations or packs, and at higher coverage, or when dispersed amidst a sufficiently dense background of non-motile but lightweight beads, they settled down into a state of globally aligned orientation and velocity – in other words, a flock.

The apolar rods on the other hand shuffled vigorously along, forward and backward in an unbiased manner. At high coverage these formed symmetric aligned states.

It turns out that confluent epithelia (dense-packed monolayers) made of elongated cells self-organise into a similar state of macroscopic alignment, too, with surprising properties that can be nicely understood from active-matter theories. 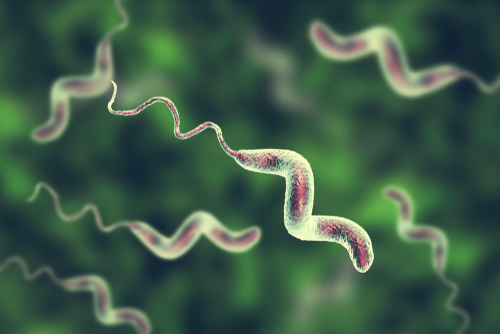 As well as studying motile bacteria, Ramaswamy and other theorists have used suspensions of self-propelling rods to better understand the properties of active matter.

How can a better understanding of active matter help biologists? In what biological questions do you think it will be of interest?

I don't want to make exaggerated claims on behalf of active matter, and I know that an interest in fine detail is essential to biology and annoying to most physicists. But if we are to understand the general laws governing organisation, changes in organisation, statistical properties and mechanical response in living matter, we need minimal, not highly detailed approaches. When we employ such approaches, we need to keep in mind which properties are indispensable, and certainly the presence of sustained energy input and dissipation is one such.

In this sense a physical approach to biology must necessarily be informed by the active-matter viewpoint. Armed with this framework, several groups worldwide have already made vital contributions to our understanding of cytoskeletal mechanics and organisation, cell division and cytokinesis, cell spreading and motility, tissue homeostasis, morphogenesis, collective behaviour in microbial suspensions, to name just a few. It will continue to be of interest in these fields at least.

Have studies of active matter led to any insights as to the mechanism of patterning in living organisms?

Yes, especially in developmental biology, where patterns and mechanics come together: examples include cell polarity establishment, left-right symmetry breaking and cytokinesis. The active character here is the contractility of the actomyosin cytoskeleton.

To what extent are physicists and biologists working together to advance understanding in this field? What are the challenge of integrating knowledge from the two disciplines?

The success stories I mentioned are all from close collaborations between biologists and physicists. The single biggest challenge is that the quantity and character of biological information, even from a simple experiment, is very difficult for a physicist to absorb, sort and synthesise when needed.

There is also the difference in what one means by "theory". I think the most valuable contribution a physicist can make to understanding biology is not a highly detailed molecular simulation to reproduce a phenomenon, but minimal, coarse-grained theory informed by general principles that guide one in which detail is essential.

I think the dialogue between the two sides will improve in quality over the next generation if physics is taught with examples from biology, and biology students grow up learning physics side-by-side.

Yes, and this is certainly happening in many areas. Mechanobiology is at this point a mature field. But this connects to the last remark I made in answer to the previous question. It will become natural to do so if the education of biologists and physicists has much greater overlap than it does now.

Acknowledgements
This being an interview, not a review article, I will not list my brilliant students and collaborators and the many other exceptional contributors to this field worldwide. I must however place on record that the theory of the hydrodynamics of active liquid crystals began with the outstanding PhD work of the late Aditi Simha.
- Sriram Ramaswamy

Sriram Ramaswamy is a professor of physics at the Indian Institute of Science, Bengaluru and helped found the field of active matter. He was elected a Fellow of the Royal Society (FRS) in 2016.