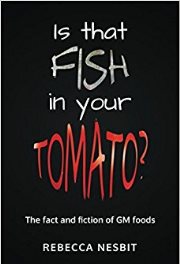 As with any new agricultural technique, GM crops can create positive and negative effects on ecosystems and economies. In this book, Rebecca Nesbit analyses the successes and failures from nearly 30 years of research and commercial ventures involving genetically modified organisms.

Nesbit is herself a rare breed: an author who has experience from both sides of the GM debate. As an environmental campaigner in her teens, she stood side by side with the activists who remain fiercely distrustful of GM crops and big agri-businesses; as a former research scientist and press officer, she has worked extensively with agricultural scientists and biotech companies. It gives her analysis an authoritative yet authentic voice.

Is that Fish in your Tomato begins with an overview of the long history of genetic modification and the development of GM breeding techniques – from the days when scientists simply fired DNA at onions with an air gun to today's highly accurate gene-editing technology.

After a summary of the mistrust, missteps and misinformation that led to the 'Frankenfood' years and widespread anti-GM protests, Nesbit takes you through the reality of what has actually happened where herbicide or insect-resistant crops have been developed, sold and grown. She then looks at the status of other GM applications, such as livestock and biofuels.

In the latter half of the book, Nesbit contemplates important issues such as how GMO and explicitly non-GMO food production can coexist without destroying each other; and how good regulation could mitigate our concerns about research and food production involving genetics.

It is an admirable attempt to summarise a complex and controversial topic without bias or taking sides. The debate around GMOs is not likely to be settled anytime soon, but if more people read books like this, at least the discussion will be an intelligent one.