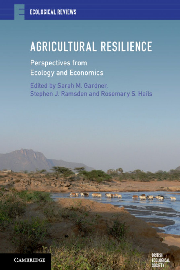 Given the wide range of factors that contribute to its form and function, agriculture is complex. Broadly, these factors comprise environmental and socioeconomic components that are constantly changing and thus promote or compromise resilience.

Following an introduction defining resilience – that is, the reaction/response to stimuli so as to maintain the system – there are two parts to this book.

Part I focuses on the roles of biodiversity and ecosystem services in developing resilience. Topics include the relationship between complexity and resilience, biodiversity and agriculture, valuing ecosystem services, plus pollinators and resilience. Additional topics address resilience in small-scale farming in developing countries, the role of biotechnology to promote sustainable intensification and the case of decision making by individual households in sub-Saharan pastoralist communities.

Part II concentrates on relationships between biodiversity, ecosystem services and resilience. Included in the broad range of examples are the roles of government and research institutions in developing resilience, resilience in relation to natural resource management in Australian agricultural landscapes, and the use of ecological-economic modelling and viability analysis to develop best practice. The integration of economics and resilience is examined with examples from Australia, while integration of biodiversity and ecosystem services is discussed with reference to the European Union. The value of environmental metrics is also considered.

The 36 contributors from various institutions have produced a valuable text that is a vital reminder of the multifaceted nature of agriculture at a time when a warming world is changing rapidly and the global population is increasing. The challenges of feeding a growing population will only be met if adaptability in agricultural resilience is promoted globally.