Charles Darwin’s On the Origin of Species 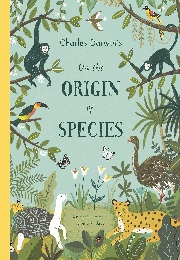 Sabina Radeva’s picture book is not just a re-writing of Darwin’s great text, but a primer on evolution and Darwin himself.

Unlike in its source text, ‘Evolution’ is mentioned in the very first spread, Lamarck and Georges-Louis Leclerc are discussed, and even Darwin’s family is introduced before we are walked through key messages simply and clearly (variation is mercifully introduced by dogs before pigeons), all interspersed with choice quotes from Darwin’s original paper.

The book is pitched as a ‘re-telling’ but it is also an update; Radeva (a molecular biologist by training) explains how our understanding of evolution has itself developed since Darwin: inheritance, DNA, even epigenetics are clearly introduced, followed not only by a succinct glossary but a page debunking common misconceptions.

Radeva’s illustrations are also captivating. Her palate is balanced between the brilliance of the tropics and the more muted colours of Victorian Kent, and the spreads contain stunning details – some almost invisible (the aquatic microscope taken onboard the Beagle sits proudly in Darwin’s study), some touching (Annie Darwin sits alongside another ape towards the end of the book – an understated nod towards less happy elements of Darwin’s post-Beagle life), while others clearly showcase Radeva’s broad knowledge of Victorian natural history (her ichthyosaur evokes Henry De la Beche’s reconstruction during a discussion on the incompleteness of the fossil record).

Whether bought as a child’s first book on evolution, or used by teachers in early years classes, Radeva’s retelling is a triumph that will be treasured, read and re-read.