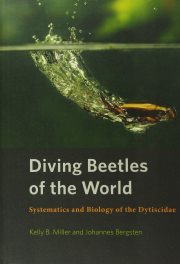 Beetles (Coleoptera) are officially the most prolific insect group (although some think the Hymenoptera may actually top them). With more than 300,000 species, it is fitting to start with a volume covering one family, with a modest 4,300 species (about as many as all mammals).
Given the dearth of entomologists to work on these largely carnivorous, underwater or amphibious predators of worldwide distribution, the authors marshal a wealth of evidence to take them to genus level.

This is a specialist volume assuming some background familiarity, taking the reader from open-water habitats to figurative uncharted depths such as the presence of dytiscids in subterranean cave systems and rocky crevices.

As with all beetles, they are holometabolic and the aquatic larvae are morphologically distinct, undergoing pupation to the adult stage. Pupation tends to occur out of water, the adults being air breathers that carry bubbles under their wings. Aquatic ecotypes are described, with photos from global sites and information on collection, preservation and study.

There are sections on diving beetles' importance to man and conservation – they often represent habitat indicators. Several are only known from just one or a few specimens from a similar geographic sampling, particularly in the tropics. Their diversity is better represented in regions of historical entomology such as Europe, whereas areas such as India appear to be poorly worked on since 1970.

The book provides a taxonomic breakdown, the largest subfamily being the Hydroporinae. The main chapters follow key specimens to subfamily and tribal levels using external morphology and genitalia. These keys include extensive line illustrations. The generic coverage deals with size, diagnosis, classification, diversity and natural history, with impressive distribution maps for each.

The work highlights gaps in our knowledge and has a copious reference section contributing to future work. The book could have summarised the classification better and, despite colour photographs, diving beetles' attractiveness is not necessarily highlighted. However, this book remains an essential for a group that competes against Lepidopterans and dragonflies in popularity.