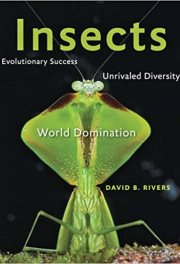 Texts on insects seem to be more common than ever, and not before time in my opinion. Insects is written in a contemporary tone and Rivers uses a unique style to convey concepts in entomology. He admits in the preface that the book has been written to make insect biology more accessible and interesting to students, and you can see his enthusiasm for the subject on every page. He needs to have faith in his readers, though, as being told a number of times that insects are not all that bad is a little wearing.

Each chapter follows the same format, with sections such as Key Concepts, Chapter Reviews, Additional Resources, and other more obscure sections such as Fly Spots (unique and fascinating features) and Bug Bytes (links to online resources). The tiered self-tests (weirdly called Mushroom Farming after the mushroom bodies in insects) clearly mark this as an educational text rather than one for the general public.

The text is supported by clear and colourful diagrams and photographs (many of which are taken from the public domain). Topics covered include the general anatomy and physiology of insects, forensic entomology, and insects as both friend and foe. There are few errors, but the Fly Spot information regarding the reproductive biology of honey bees is inaccurate and should have been checked before publication.

Rivers has produced a textbook with a difference and I am sure that any undergraduate studying general insect biology will find it useful and informative.