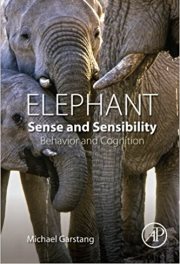 Renowned for their memory, relationships and physical strength, elephants are also a flagship species in a number of conservation initiatives. Michael Garstang's interdisciplinary work ties together principles from evolution, neuroscience, ethology, meteorological studies and animal behaviour to explore and unveil elephants' capacities for diverse emotions, complex communications and associated intelligence.

There are chapters on brain function, ethical interactions and language that connect and explain the fundamental processes underlying the complex behaviours of the three species of pachyderm.
The size of an elephant brain is, on average, 5kg – reflecting their enormous body mass, their intricate motor skills and the complexity of sensory inputs they can process from the environments to which they are adapted.

The large cerebellum with its large temporal lobe suggests this may support their ability to detect and process infrasound information. The large olfactory bulb explains their excellent sense of smell. Further, in comparison with primates and cetaceans, the elephant species also have an unusually large and convoluted hippocampus, which is linked to memory functions and emotions.

Much of the work on communication, sound and hearing is grounded in empirical research, and the text is enriched with anecdotes. While fully referenced, the book is written in a readable style. The illustrations capture these majestic beasts' vitality and diversity of behaviours.

The tragedy of the demise of elephants, due mainly to poaching and habitat loss, is made all the worse as these animals possess such marvellous and complex neural processing capacities, and their broad sensory abilities enable them to perform impressively fine motor skills, feats of memory and subtle behaviours. For this, elephants deserve respect and more committed conservation measures.

Elephant Sense and Sensibility will be a valuable resource for students and researchers across many disciplines, as it demonstrates the deeper insights that are afforded by employing theories from a range of perspectives, such as animal behaviour, conservation, neurology teaching, learning theories, and communication and simple linguistics.

For conservationists, it provides a handy resource to add weight to arguments pressing for more rigorous elephant protection and conservation enforcement.