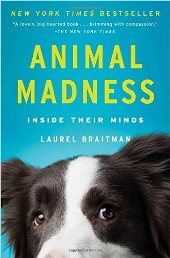 As I sat reading Animal Madness in my chair, my cat Jeremy came into the room. He leapt onto my lap and reached a tentative pink paw over the book. With a look of quiet concentration he pulled it down towards my knees and, after turning around a few times, settled down for a sleep. He possesses a unique cat-sense that alerts him any time I try to focus on anything that doesn't involve waving a feather on a stick above his head. My other cat, Mark, is less jealous, but comes with his own neuroses. His inexplicable fear of oven gloves often proves to be the only method of getting him out of the way when cooking.

At the centre of Laurel Braitman's book is her own pet, an inconsolably anxious Bernese mountain dog named Oliver. His various insecurities, self-destructive behaviour and unfortunate demise are weaved in among less suburban stories. Polar bears that swim compulsive figures of eight, gorillas raised as men in East London, traumatised elephants turning on their tamers – all are discussed with a tenderness that never strays into sentimentality. The focus is not so much on mentally disturbed animals as it is a study of their emotional complexity. Some of the stories are striking, and the pervasive medicalisation of both pets and zoo animals is a timely reminder of America's obsessive reach for psychopharmaceuticals. This is a book that tries earnestly to illuminate the foggy juncture at which humankind and the animal kingdom intersect.

Despite being sharply written and immersively researched, the book is too philosophically unsophisticated and reserved in judgement to offer much in the way of answers to the questions it raises. Do animals commit suicide? How much progress can be made on human mental illness through animal studies? Are zoos good or bad for an animal's psychological wellbeing?

Except for a short conclusion, the book skirts around the edges of these concerns. It may contain splendidly rendered animal sketches, some interesting history and a big heart, but I for one wish Braitman had sunk her teeth a little deeper.