In October Professor Jane Francis took over as director of the British Antarctic Survey, an organisation which has led the UK's exploration and research in the region for more than 60 years. As a palaeobotanist and geologist, Professor Francis' research uses fossilised vegetation to understand how the Earth's climate has changed throughout history.

A large part of your academic work has involved looking for fossils in both the Arctic and Antarctic. Presumably you enjoy working in polar environments?

I absolutely do. I've done about 10 seasons in Antarctica and six field trips to the Arctic, and they are fantastic places to work. It's amazing to go somewhere that is so remote and cold and find a leaf that shows the climate was once almost tropical there.

Whenever you set up camp in the field – a huge operation that can take a day or two – there's always a moment when the helicopter or ship leaves, when you realise it's very quiet, and you're just a small group of people alone in a very isolated place for a couple of months.

It's generally a very beautiful and extremely humbling place – the climate can be pretty fierce and you're just a tiny speck in this awesome landscape. But I've been in the Arctic peninsula when the sun is shining, and when the wind drops it's actually quite warm. You can just sit and watch an amazingly serene and tranquil landscape, with the sunlight glinting off icebergs and the odd bird call. Then you don't want to be anywhere else in the world.

We take first aid and health and safety very seriously so I've not really had any close calls. The scariest experience was when I was working on Svalbard (Norway) a few years ago and a polar bear came quite close to our camp. In the end he fell asleep in a gully for a few hours in front of our camp and then left, but you do have to be very careful.

How did you get into polar-based research in the first place?

As a geologist I started working on fossil plants for my PhD and did a project on the rocks of the Jurassic coast in Dorset. I started working there on fossil trees, leaves and pollen and reconstructing ancient forests. Then, while working in central Australia, I had an invitation from the Canadian Geological Survey to go and see these amazing fossil forests they'd discovered up in the high Arctic. They were spectacularly preserved – they hadn't been petrified and turned to stone like you'd usually find. You could saw open the wood and it would burn; you could pick the leaves up and they'd trickle through your fingers, just like in a deciduous wood floor in autumn. Except they were 45 million years old.

What do you find so interesting about recreating polar forests?

They're just so unusual – there aren't really any polar forests around today so they are like a window into the past when the world was warmer, with higher levels of carbon dioxide, and forests could live way, way closer to the poles. And that's happened many times in the past.

I worked with geologists in New Zealand looking at forests from 250 million years ago that covered great swathes of the Southern Continent. The leaves fell into swampy areas and became coal, which is where most of the southern hemisphere's coal comes from.

How do you find fossil forests when everything is covered in ice?

Most of the places we work have good exposure of rocks, for example coastal cliffs, or mountains that stick up above the ice sheet, or islands without an ice sheet. Usually someone has been there and recorded evidence of plant life and we go and look at it in more detail.

We spend a couple of months in the field in a tent camp measuring the geological sections to build a picture of what the environment was like. Then we take sediment samples and try to find fossil leaves and wood to try to reconstruct the vegetation.

How do you use vegetation to draw conclusions about climate change?

We use as many parts of the fossil as we can. From the fossil wood we can identify the type of wood from its structure and techniques that modern botanists use – things like tree ring analysis and changes in cellular composition to look at seasonality. Then there's also analysis of leaf size, shape, venation and things like that. We also look more generally at the type of tree and the climate envelope it grows in today, as well as pollen and their modern relatives. We'll also look at the climate signal in things like isotopes and soil profiles. 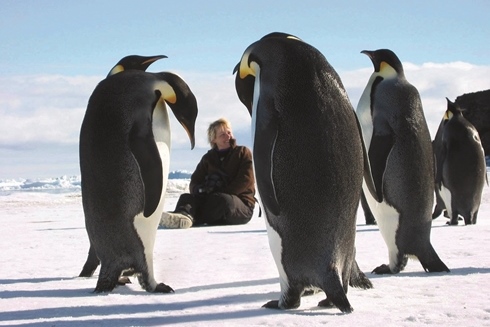 Will you still get to go to Antarctica as much in your role as director?

It's going to be much more difficult but I'll certainly be going there to visit the bases. I do hope I can manage to work in the field for another season. There is a lot of interest and a lot to be learned about the faunas of the deep sea and southern ocean around Antarctica – people are discovering new faunas there all the time.

There's also a lot of work on lakes as they are a really good record of past climates too. Subglacial lakes under the ice sheet are very interesting, looking at whether there are bacteria or life forms that have been isolated from the rest of the world for a long time in these hidden environments. I hope there will be other attempts to reach Lake Ellsworth [an operation to drill 3km down into the subglacial was abandoned in 2012] as it's a really exciting project.

There was talk of a merger recently between the British Antarctic Survey (BAS) and the National Oceanography Centre – presumably to help both organisations deal with budget cuts. How is BAS coping with the general reduction in research funding?

BAS scientists are very good. A recent assessment found that the standard of their work is as good as that of the best universities in the country and they've been really good at winning research grants. In terms of oceanography, it's an important frontier for research and I think there's huge potential for research that will take place between our two organisations.

Would a merger have diluted Britain's 'strategic presence' in the area at a time when there are concerns over ownership of the region?

I don't think the issues in the last two years were anything to do with that. BAS has two missions – to do high-quality, world leading science and to lead the British presence in Antarctica. By carrying on doing good science we'll do just that.

What are your overall aims as director?

BAS will just carry on doing great science. There are some really important scientific questions to answer about the polar regions - these regions are the most sensitive to climate change. We need to understand all of the environmental systems that operate there and the speed at which they change.

Jane Francis trained in geology and is professor of palaeoclimatology at the University of Leeds, where she is currently dean of the faculty of environment. In 2002 she was awarded the Polar Medal in recognition of her contribution to British polar science. She was appointed director of the British Antarctic Survey in March 2013.