Ecologist and conservationist Dr Natasha de Vere talks to Tom Ireland about DNA barcoding every species of native flowering plant in the UK, and the crisis facing plant-pollinating insects around the world

In 2012, Wales became the first country in the world to DNA barcode every single one of its 1,143 native flowering plants. The project, led by Dr Natasha de Vere, has inspired countless countries to make similar databases of the genetic diversity within their borders.

As head of science at the National Botanic Garden of Wales, de Vere is now using the DNA barcode database to help identify plants and pollen, and the insects and other animals that pollinate or feed on them.

The Barcode Wales project has expanded and de Vere, in collaboration with the Royal Botanic Garden Edinburgh, has just completed the DNA barcoding of all the flowering plant species in the UK, too.

The Biologist caught up with her to discuss how DNA barcoding can help us halt the decline in the UK's wild pollinators, and the joys of working with plants.

What is DNA barcoding?

DNA barcoding is a global initiative. People are doing it with plants, animals and fungi all over the world. We all look at the same regions of DNA in each group, which are used to create a global database that enables us to identify living things from tiny fragments or material that is difficult to identify morphologically. It is really the original basis of biology, identifying what things are. It's open science.

What regions of DNA are used to make a barcode?

You need a short region that is easy to amplify and will vary between species. In animals, it is quite straightforward – a region of mitochondrial DNA known as cytochrome oxidase 1, or CO1, is used. It's around 600 base pairs long.

When it comes to plants, it is much harder – you can't use the mitochondrion, as it evolves too slowly and there is all sorts going on with plants' DNA: they hybridise; their genome size varies enormously. So we use a combination of two regions – rbcL and matK from the chloroplast, and another region from the nuclear DNA called ITS2.

How did you barcode every single plant species in Wales?

We started thinking about what we could do to put Wales on the map. We set ourselves a very ambitious target to be the first country to DNA barcode all its native flowering plants, and started in 2008. We had to sample every plant in triplicate.

We didn't have a huge amount of money or staff resource, but we had a secret weapon: generations of botanists and their specimens. The UK is probably the most 'botanised' country in the world. We were able to collect about 80% of our samples from pressed specimens in herbaria. We had a conveyor belt of people taking tiny samples and processing them.

From 2008 to 2012, we just slogged away really, creating this DNA reference library, which you could then use to identify any piece of plant material from the environment. It has opened up so many possibilities 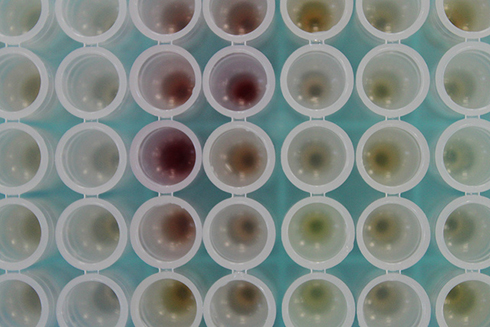 How are researchers using all this data?

The thing I specialise in is pollen. Previously, you could identify which plants pollen grains came from with a microscope, but it was difficult and you needed a great deal of expertise.

With DNA barcoding, we can look at all the pollen on pollinators and see exactly what plants they have visited. Where exactly does a hoverfly go? What plants do bees prefer to visit at certain times? You couldn't follow a bee as it flies across the countryside before. Now we can use forensic-style tracking to see exactly what plants they have visited and what the most important plants for them are, and then use that information to try to keep them healthy.

DNA barcoding can also be used to analyse all the different types of pollen found in honey. So you have a record of all the plants bees have visited, but over a longer time period. My PhD student Jenny Hawkins was interested in the medicinal properties of honey and whether it could be the compounds from certain pollen that influence those different medicinal properties.

We are also partners on a large NERC-funded project, led by Bangor University, that takes samples of pollen from the atmosphere and uses DNA barcoding to find out exactly what specific type of grass pollen is present, and then we can see how that relates to hospital admissions for asthma.

You recently expanded the project across the whole of the UK. How is that going?

Yes, we've completed the entire UK flora now as well – 1,479 plants – jointly with the Royal Botanic Garden Edinburgh. We'd already done most of the UK flora from the Welsh project. What we didn't have were the sort of things that only grow on top of Scottish mountains, or in rural areas in East Anglia.

Now that we have the UK barcoded, it is being used for all types of things. The RSPB is looking at turtle dove diets using their faecal samples; others are looking at food webs and working out what eats what.

I also recently joined up with the Smithsonian Institution on the Google-funded Barcode of Wildlife project to fight wildlife crime and the trade in endangered species. That can be things such as rhino horn, but it is also often medicinal plants or rare orchids.

The idea was to move DNA barcoding from an academic process into a forensic technique that could be used in a court of law. There is a court case ongoing in South Africa that involves DNA barcode evidence, but we can't reveal more details. 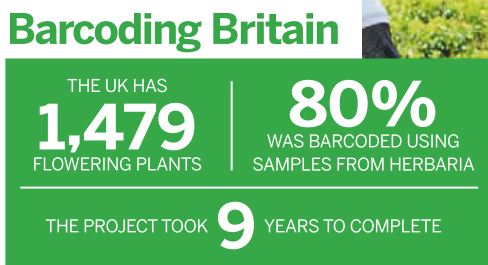 Some readers will wonder how DNA barcoding is different to environmental DNA (eDNA), which also uses fragments of found DNA to identify species and analyse ecosystems.

It is essentially the same thing, really. Our work on the plant DNA found in honey is very much like looking at DNA that has built up in an environment. eDNA started in the microbial and freshwater biology fields, and there are lots of different techniques and markers used.

Are other countries now barcoding their native flora and fauna?
Huge numbers, yes. Most countries now have some sort of similar initiative, and many are now more advanced than in the UK – China, for example, has put in a huge amount of resources to DNA barcoding. Every two years, there is the International Barcode of Life Conference. It has very much moved from people working out how to set this up and build the databases to looking at all the great applications of DNA barcoding that are now possible.

Just how serious is the decline in pollinating insects and how great a threat does that represent to the global food supply?

Honeybees and wild pollinators are facing many threats. For honeybees, it is a perfect storm: they are fighting pests, disease, insecticides and various forms of mismanagement, such as being moved around vast distances in the US to pollinate crops. Then there is the loss of habitat for foraging. They could probably deal with one of these, but not all of them.

Staple crops such as rice and wheat are wind pollinated, but everything that keeps us healthy – things like nuts and fruits – is insect pollinated, as are other things we don't want to lose such as chocolate and coffee. In some countries we are already seeing that there just aren't enough pollinators out there; they are experiencing pollination limitation. That will eventually start to happen in the UK if we don't do anything about it.

In the UK, we know a lot about honeybees and bumblebees but not all that much about hoverflies and solitary bees. Other wild pollinators are also suffering from habitat loss and fragmentation.
You are interested in collaborations that mix science and art. How does that help you communicate the importance of the research you do?

We always want to tell the public about what we do. Some people relate to a scientific message, but many don't. The questions we are looking at are questions that all of society should be thinking about, so the idea with art-science is to get people to think about it using as many ways as possible.
We've worked with a variety of artists, from fine art photographers exhibiting pictures of our plants in China to Sculpture Cymru, who came to visit our researchers and responded to it in sculpture form. Instead of entering the garden and seeing a board explaining what our researchers are doing, people will see a one-tonne marble sculpture of a pollen grain – it's a great way to pique their interest.
When my PhD student Laura Jones presented the results of her research on the plants honeybees had foraged on month by month, a group called Stitching Botanicals created patchwork pieces showing each plant that she had found. Together the pieces formed a graph of the results, but in a completely different and beautiful way, and people were drawn to look at it in detail.

Is enthusing people about plants a challenge?

Sometimes, yes – just moving from plants to pollinators you see that people engage so much more with a bee than a plant. So I try to present the ecology. Visitors weren't stopping much in our tropical house, so we made it into a butterfly house. Then they can see the butterflies foraging on particular plants, and we can tell them about the species that visit particular plants, and you bring the whole thing together. That's been really effective.

You sound very busy. Do you get to enjoy the gardens much?

I have an office that overlooks the garden and the Great Glass House. I have a broad role here so I'm out and about a lot, checking on the butterflies and seeing what everyone's working on. It's a beautiful place to work. 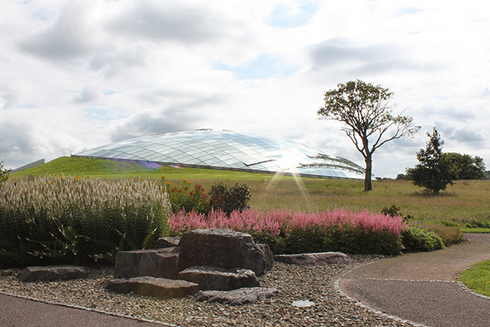 The National Botanic Garden of Wales

Dr Natasha de Vere is head of science at the National Botanic Garden of Wales and a senior lecturer at the Institute of Biological, Environmental and Rural Sciences, Aberystwyth University.