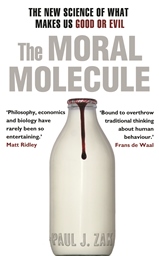 Paul Zak is often addressed under his moniker of 'Dr Love' and his TED talk on oxytocin has attracted more than 950,000 views. The Moral Molecule brings together Zak's work on oxytocin, in particular the role it plays in human experiences and behaviours. The reader is taken through his research, his insights on experimental design and the people who help him investigate the true nature of oxytocin.

The Moral Molecule has been subject to some debate from other science writers and neuroscientists, particularly with regard to other roles oxytocin might play which could conflict with the 'moral' role.

Irrespective of this, the book is well written and a great example of communicating science in an inviting and engaging way, regardless of the scientific ability of the reader. The book appeals to a variety of audiences, as Zak himself did not come to biology through a traditional route, having originally studied economics and mathematics. Above all the book conveys the passion of one individual, illustrating how scientific curiosity and experimental design should be considered.