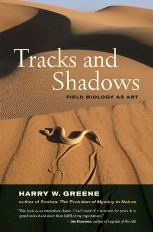 Harry W Greene is a professor of ecology and evolutionary biology at Cornell University and a career herpetologist whose previous book, Snakes: The Evolution of Mystery in Nature, won the PEN Literary Award. In this new book, he covers snakes once more, but also other reptiles, natural history, fieldwork, the wonders of nature, his autobiography and his mentor's biography.

It's packed full of details from the world of field naturalists from the mid-1940s to the current day. For today's readers, the numbers of animals killed in the search for data may be concerning, but this is an honest account of a way of working that was then not just accepted, but expected for a naturalist.

The sub-heading, Field Biology as Art, is apt. Reflections on the beauty of natural history permeate the chapters, as does the importance of humanity having a love of nature and an understanding of issues such as conservation. Another theme is that the best natural historians are those who are attentive. Being a careful observer increases the likelihood of caring, and communicating that caring might mean less destruction of vital habitats such as the rainforests and deserts. Alongside such thoughts, there are detailed descriptions of research and teaching, as well as plenty of information about reptile biology.

The book's target audience is probably academics, scientists and natural historians. At times the flowery and colloquial language is slightly offputting. At other times, it is refreshing to read a scientific narrative that verges on the poetic. Readers will have to make up their own minds.