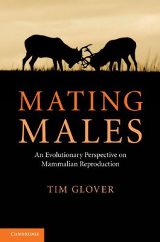 This review has been a difficult task, partly because I know Tim Glover and enjoy his company, as the book is a curious mish-mash of different approaches to the reproductive biology of mammals. The 1970s and 1980s flavour is confirmed by the references. There isn't an "evolutionary perspective" except in such phrases as "it is fashioned to suit the mode of coitus in each species" when talking of penis shape.

Apart from a description of spermatogenic cycles in the middle of the book, the approach is much more for the lay reader than for the professional biologist. Nevertheless, biologists will learn a lot from it, such as the elephant is the only mammal that can step on its own penis.
There are, however, lots of little errors, and a few big ones: that meiosis occurs after fertilisation in Lepidoptera (forgivable in a mammal-specialist); that the vomero-nasal organ "is essentially equine" (except for nearly all reptiles?); and I have a personal distaste for the use of "varies" where he means "differs".

Otherwise this is a useful book for most modern biologists to read. Too much from the last century has been forgotten in today's teaching programmes.