Nature’s Oracle: The Life and Work of W D Hamilton 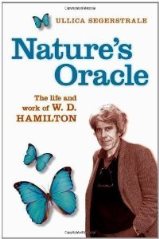 William Donald Hamilton (1936-2000) was best known (though relatively unsung) for his significant contribution to evolutionary theory, notably for clarifying the role of self-sacrificing behaviour as an advantageous trait.

His work showed that altruistic behaviour is advantageous as long as progeny or close relatives benefit, i.e. kin selection. With this, Hamilton advanced evolutionary theory by focusing on survival of the genes rather than on the individual. Hamilton is also considered to be an early advocate of sociobiology – the theory that social behaviour results from evolution.

Born in Cairo to New Zealanders, Hamilton was educated in the UK but worked in the USA and later returned to Oxford University as Royal Society research professor. Much of his fieldwork was conducted in the biodiversity rich Amazon and later the Congo.

Clever, controversial and sometimes confrontational, Hamilton was primarily a scholar and researcher whose influence was widely felt and whose legacy remains through his own work and through that of colleagues and students.

Ullica Segerstrale, professor of sociology at Illinois Institute of Technology, has produced an interesting and readable biography based on Hamilton's letters, published work and the testimonies of friends and family. It is detailed and uncompromising. Hamilton's academic and personal worlds were not perfect and nor was Hamilton.

The extensive notes and references will prove valuable to historians of science and students of sociobiology. The text also provides an insight into the major and minor players in biological science, plus the uncertainties, rivalries and publishing paradoxes in evolutionary and related science in the late 1900s, many of which remain today.