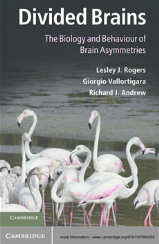 Most people have an innate curiosity about their brain – the way it functions and processes complex information, makes rapid decisions and retains emotions, thoughts and experiences from decades or seconds previously.

This textbook does not offer a holistic view of the brain and its myriad functions but instead focuses on lateralisation – the division of the organ into two physical halves each controlling different aspects of behaviour or sensory acquisition, and which help define individuals within populations of organisms as diverse as toads, fish, birds and mammals.

The book aims to provide an overview of research on animal lateralisation, illustrating what has so far been deduced from research and discussion of a range of animal types. Those seeking an exclusive discourse on the role of lateralisation in humans and the contribution it has made to our evolution and our current day lives may be disappointed, because the book looks at other organisms – both vertebrates and invertebrates, which exhibit this anatomical trait.

It includes discussion of the possible relationship between right-handedness and language acquisition in humans as both are controlled by the left hemisphere and may be linked. Research into bonobos and chimpanzees looks at the role of right-handedness in populations reared in the wild versus those in captivity to see if the individuals are mimicking their human keepers.

The text is an important window into how evolution through the development of lateralisation has allowed the brains of a diverse range of organisms to maximise their exploitation of the niches in which they live.