The Spark of Life: Electricity in the Human Body 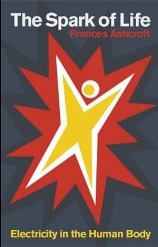 There are some startling revelations scattered throughout this readable but muddled book. The fact that the founder of the Methodist movement, John Wesley, was a devoted exponent of electrical therapy is a story well told, as is the existence of 6cm sperm in Drosophila. Yet elsewhere the book is confused.

Nerve impulses are introduced as pitifully slow, at 0.07 miles per second, but are later said to "race along" at 250mph (which is the same speed).

Ashcroft speaks of dangerous electrical shocks being variously rated at 30,000 volts, 500 volts, 350 volts, down to an electric ray at 50 volts. Although she nicely describes arrhythmia, heart attacks and cardiac arrest, she does not mention cardiac failure. Worse, she commends a description of the brain as electrified clay. The pictures aren't too good, either. There is a neuron without its axon hillock, muscle fibres lacking striations and a wrongly portrayed aorta.

The author's theme is that the electrical charges of ion channels hold the secret to life. This is like arguing that carburettors are the key to supermarket shopping. Cells are far more complex and diverting than you'd suspect from this account.

On the jacket is a claim by Bill Bryson that this is a wonderful book. This is the same Mr Bryson who stated that Leeuwenhoek's brass microscopes were made of wood. He was wrong then, and he's wrong now.