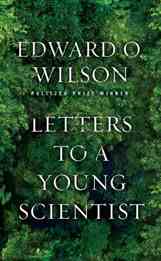 The celebrated conservationist, entomologist and sociobiologist EO Wilson draws on more than 60 years of academic endeavour to impart his distilled wisdom in this engaging and inspiring short book. The format is in part autobiographical and in part a series of open letters addressed to a graduate student embarking on their research career. In essence, it is as if he were writing now to his young self on arrival at Harvard University in the 1950s.

Described as a deliberate play on Rainer Maria Rilke's Letters to a Young Poet, Wilson compares poetry and science more than once and it closely resembles Peter Medawar's treatise Advice to a Young Scientist. In it Wilson debunks some of the myths surrounding the attributes required of a good scientist. We learn that neither mathematical skill nor a genius level IQ is essential. Rather, he argues for common sense, a rational and logical thought process, keen observation and an inquiring mind.

Wilson also advocates commitment to small, informal experiments. Here, he is out of touch with 21st century scientific research, driven as much by the twin headed ogre of grant income and publications as it is by old fashioned curiosity for the truth. As a result, it is increasingly performed by large collaborative, interdisciplinary, often international, groups and not by individual scientists.

Criticism, however, would be churlish because Wilson's passion for biology is evident; his honourable motives and enlightenment cannot be denied, and the underlying principles that he espouses are those a young scientist would do well to heed. Recommended.