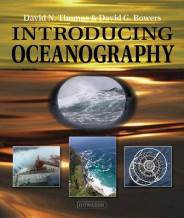 The oceans are the least explored part of our planet and yet they cover about 70% of the Earth's surface. Developments in ocean science over the last 50 years have emphasised the important role the seas play in Earth systems, notably the climate. Not only do they move vast amounts of energy and nutrients around the world but they are also the habitat for an estimated 230,000 species of microorganism, plant and animal, of which less than half have been identified.

Introducing Oceanography is one of a series of texts mainly covering several aspects of geology, including palaeontology and meteorology. The essential aspects of the physics, chemistry and biology of the oceans are covered and liberally illustrated with colour photographs and figures. For those with a technological interest there are details of remote sensing instruments, unmanned submersibles and sensors attached to animals, going where man does not, or cannot, go.

Within this short text, which combines scientific basics with exciting new findings, hopefully young minds and old will be drawn to further study and exploration. It should be a useful teaching basis for students new to oceanography. There is a glossary of terms, with a page reference to where individual terms are first mentioned, but no index.

Unfortunately the printer's devil seems to have been particularly busy in this edition of the book. The publishers have assured me that the digital editions of the book (released in December 2012) and any future reprints will have been corrected.