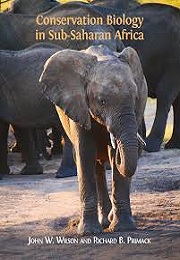 “Sometimes even music cannot substitute for tears,” Paul Simon once sang. Conservation Biology in Sub-Saharan Africa is an extremely well-written and beautifully illustrated magnum opus on almost all things biological that pertain to the difficult subject of conservation in sub-Saharan Africa. It can be viewed as a primer on ecology, a call to arms and, almost, a cry of despair as much as a reference on conservation.

I found that I could only read a small part each time I opened it. The facts and problems, given in such lucid and easy-to-read detail, are enough to make you cry. It requires courage to face the existential problems that confront wildlife (and indeed humans) in Africa. That the authors have done so, and even offer glimpses of hope, is to be applauded, as is their decision to make the book available for free on the internet. It will act as the reference on the subject – I would like to say for many years to come, but that may be too much to hope for.

The whole set-up of the book, which includes numerous boxed-out contributions from specialists within each chapter, makes it easy to access information on everything from the impact of global climate change and the expanding human population to biodiversity and the law. All are covered in enough detail, and with relevant references, to make it the ‘go-to’ book on African biology. It is to be hoped that being freely available on the internet should mean Conservation Biology in Sub-Saharan Africa reaches the wide audience it really deserves.