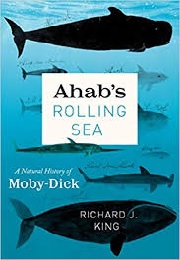 Moby-Dick is seen as one of the great pieces of American fiction, but it is rarely thought of as a great work of nature writing, argues Richard J King in Ahab’s Rolling Sea.

King, a sailor and expert in the literature of the sea, believes that should change. He explores how Moby-Dick was created from Herman Melville’s own amazing experiences at sea and the scientific literature available at the time, as across the pond Darwin was working on On the Origin of Species.

King takes us through what would have been known about marine life at the time and what Melville might have been trying to say about man’s changing relationship with the sea in the 19th century. While he does not go as far as to suggest Melville was an environmentalist, he does explore how the book’s characters view the sea differently – from those who see it as an unconquerable expanse to those who see a natural system that needs to be stewarded from plunder.

King has so much to say about so many different things: life at sea in the 19th century, Melville’s life and other works, contemporary environmental science and, of course, Moby-Dick. Although the prose often meanders off course and chapters bear little relation to their titles, the book is still very readable.

It’s an enjoyable hotch-potch of biography, biology, natural history, social history and literary review, of course aimed at Moby-Dick super-fans, but offering lots for anyone with an interest in marine biology, seafaring or the history of science. Plentiful etchings, diagrams, plates, and other artifacts illustrating whaling and natural science in the 19th century make it visually interesting too.

In a chapter typical of the sort of content in the book, King looks in detail at why Melville might have made Moby-Dick’s famous whale white, exploring types of albinism in sperm whales and their rate of occurrence, the effects of scarring and disease on colouration, and strange reports and rumours about white whales circulating at the time.

I’ve always found a good book or film can help me ‘get into’ genres or works that I’ve previously found inaccessible or hard work. Ahab’s Rolling Sea is, without doubt, a book primarily aimed at those who have read and loved Moby-Dick, but it may also be the tasty morsel that tempts those who have never got round to reading (or, in my case, finishing) this leviathan novel to finally dive in. For those who are somehow unaware of what happens to Captain Ahab and the white whale, the book does contain spoilers from the very first sentence of the introduction.