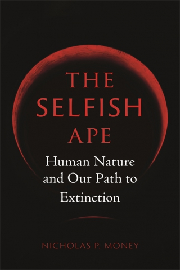 Are humans inherently selfish? In The Selfish Ape, Nicholas Money combines classical philosophy with the life sciences to suggest that we are less Homo deus (god-like) and more Homo narcissus (selfish, self destructive and just plain awful).

This Dawkins-inspired book is a tour de force of life on Earth. Money eloquently describes the dynamics of life and the quite insignificant place of humans in the grand scheme of existence. Charting important biological discoveries, he describes life from all angles, including our molecular complexity and our genetic makeup.

Although the colourful imagery and scientific scene-setting is worthwhile in its own right, the central purpose of the book lies in the last few chapters. This is where Money lays out how humans can attempt to fix the damage we have caused to the planet we are so fortunate to call home. Few would disagree that we need to drastically change our ways of living to save the world. However, Money presents extreme solutions: do not have kids (the only thing better for the environment than not being alive, apparently) and exclude other species from any human contact (it never ends well for anyone but us).

Although Money makes interesting points about the selfishness of human nature, he tends to ignore the social and structural powers that orchestrate this destruction on a grand scale. What about the pressure of unsustainable economic growth caused by free market capitalism, which has resulted in wasteful industries such as fast fashion and factory farming? Individual behaviours and decisions are important to regulate, but what about the systems that make our personal choices ineffective?

Overall, the book brings together many perspectives on human existence to create a beautiful but damning picture of humankind. However, the solutions Money offers might not be well received by everyone.