Who We Are and How We Got Here: Ancient DNA and the New Science of the Human Past 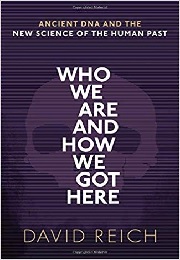 It is a rare skill to write for a lay audience and still maintain as high a level of scholarship as Reich achieves here. Readers who enjoy the investigative nature of science will be spellbound not just by the discoveries about ancient DNA, but by the technologies that researchers have had to develop.

Up to around the last decade it was only possible to routinely sequence small sections of DNA, so research had to be focussed on selecting those most likely to be informative. Now, machines can chomp through DNA using enzymes which luminesce different colours according to the four nucleotide bases they encounter. These techniques, while not described in technical detail, are fascinating reading on their own. But it is the understanding gained from our ability to sequence whole genomes from 50,000-year-old bones that is astonishing.
A number of key discoveries particularly caught my attention.

It has been known for some time that Neanderthals interbred with Homo sapiens, but surely that means they were not a separate species if they had fertile offspring? Genomic science is able to identify `ghost' populations - groups only detected by their DNA in descendants. At least one such population was predicted by this technique and discovered to have existed. Spellbinding stuff. Another received wisdom now eroded is the one-way diaspora from Africa: it is far more likely that some groups returned to Africa and mixed with those remaining there. As is usual in science, the history of our species is vastly more complex than previously thought.