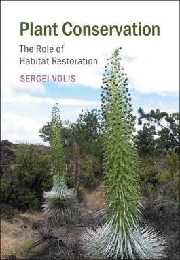 As I write this review, a BBC report is being broadcast regarding the extent of losses of rainforests equating to more than a football pitch per day. In the 25 years since the UN’s Convention on Biological Diversity, a quarter of all tropical forests have been destroyed. The human population has more than tripled since 1950, and increasing per capita footprints are matching the increasing rates of extinction. Sergei Volis’s rationale behind this book is that current conservation practices are all too often insufficient to prevent further environmental damage and species loss.

Volis does not devalue existing approaches but highlights gaps, such as the under-representation and limited use of seeds from endangered species in re-introduction programmes that have been conserved in ex situ seed banks. To combat the increasing rate of vascular plant biodiversity loss, Volis devotes chapters to methods for bulking up living collections of threatened species, translocation of individuals, assisted colonisation and habitat restoration, including novel ecosystems, with the aim of ensuring maximum ecological services in sustainable environments.

This volume will be welcomed by all serious conservationists whose dedication and hard work can be disheartening when the impact seems like a drop in the ocean. This silvicultural toolkit, with success stories from the restoration of logged forests and degraded agricultural land in the final chapters, provides hope and an armoury to face the battle against rising extinction rates. With this well-argued and structured new strategy there is a way forward that should reap results.