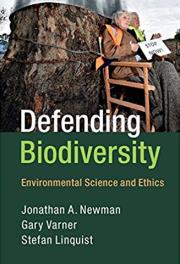 Scientists and conservationists often give impassioned pleas about the need to prevent biodiversity loss – human survival, after all, depends on nature. However, we don’t need to protect all of the natural world to retain nature’s services. The justifications for conservation therefore often don’t match the schemes that are funded.

Defending Biodiversity challenges preconceptions that are widely held by the scientific and conservation communities. For a start, most people’s perceptions of biodiversity loss don’t match the science. While we are losing species at a global scale, for example, this doesn’t hold true on smaller scales – on a local scale, the number of species is on average unchanged.

This fact in itself raises questions about what conservation’s goals should be – does it matter that introduced species are contributing to local diversity?

The change in the structure of communities has caused many conservationists to focus on returning habitats to something similar to a historical state, but is this simply a nostalgic desire to return nature to a randomly chosen point in time?

The target of preserving ecosystems in a specific state is one of the many pillars of conservation this book explores philosophically. Intrinsic value of ecosystems in a ‘natural’ state turns out to be difficult to justify: just because an ecosystem has certain properties in the absence of humans doesn’t mean these properties are morally significant.

Assigning intrinsic value to ecosystems comes with problems such as how to define a ‘healthy’ ecosystem and how to choose the time at which we consider the ecosystem to have been in its desirable state.

Perhaps even more concerning to conservationists is the authors’ explanation of how the same philosophical challenges exist when justifying the prevention of species extinction, including the problem of arbitrary definitions.

Defending Biodiversity is an essential read for anyone who works in conservation and, in particular, anyone who is teaching a conservation-related course. You may find that, like me, you have your fundamental beliefs completely shaken.