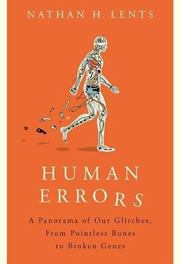 As Alexander Pope said: “Trust not yourself, but your defects to know” – after all, “perfection is a trifle dull”. Human Errors is a description of some of our ‘defects’, many of which are peculiar to humans, but a number of which, such as the presence and replication of ‘junk’ DNA, are common to all multicellular organisms, and a number of which are common to all vertebrates (such as the ‘unnecessary’ path of the recurrent laryngeal nerve passing underneath the aorta before returning up the neck to the larynx).

The author admits that his survey covers only a fraction of the design faults in the human body, but it is still surprising that he does not describe one that most people are familiar with, our useless appendix. The book also describes some of our mental insufficiencies. An anecdote is used to explain why we tend to believe anecdotes rather than more objective information. The book is written for a US audience and in a politically correct manner uses ‘she’ and ‘her’ whenever referring to human behaviour.

Despite our errors, life expectancy – especially in the developed world – has increased substantially, but has come with an increasing impact on the planet. The author places great faith in science and medicine as saviours of humankind. In particular, he says that the “real prize is the search for immortality” (and, indeed, he admits that given recent advances in aging research, he has taken up exercise and stopped smoking in order to be alive when such advances may be of use to him).

Surely, however, goodness should be one’s ultimate goal, rather than the prevention of death. As Schopenhauer said: “To desire immortality for the individual is really the same as wanting to perpetuate an error forever’.’ But then I now wear a T-shirt that says that I am a founder member of the ‘Grumpy Old Men’s Club’ so my own opinions need to be taken with a pinch of salt.