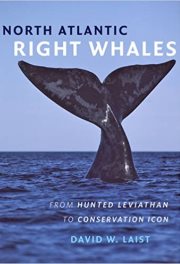 David Laist's work on right whales is an astounding purchase. The majority of the 22 chapters offer a comprehensive history of whaling in the North Atlantic along the eastern seaboard of the US.

Several chapters have quirky titles. For example, chapter 3: 'Foraging with a Smile' – anatomy and how the North Atlantic right whale feeds is the topic, and the conclusion is that the structure of the mouth is rather like that of the flamingo. 'What's in a Name?' (chapter 2) investigates the naming of the species. Laist tells us that the right whale was hunted during the 1500s as an alternative to the bowhead whale – they looked similar, but the former was easier to catch, had more oil and whalebone so was the 'right' whale to catch.

Chapter 15 covers right whale populations prior to severe exploitation, followed by a chapter on their subsequent devastation as whalers moved to other, non-whale species. By 1893, concerned officials made a stand against the wanton taking of marine life. The legacy of this is the International Whaling Commission and a moratorium on whaling. Although only partly successful, it has achieved a total ban on the hunting of the right whale. Certain countries have ignored the ban and can be identified in the chapter entitled 'A Second Chance'.

The most enigmatic chapter title is the first, 'Rescuing Nantucket'. It sets the scene for the whole text with a mixture of present-day and historic descriptions and anecdotes. The Centre for Coastal Studies, based in Provincetown, Massachusetts, began as a research organisation, but quickly became involved in developing methods for releasing whales caught in fishing nets and lines, particularly the North Atlantic right whales. Their expertise is epitomised by the rescue in 1997 of a male right whale named 'Nantucket' because it insisted on heading to that location.

The book is a mixture of storytelling, history and science. At the end of each chapter is a 'notes' section or the references for the chapter. An appendix shows data from 1530 to 1610 describing the number of right whales caught, by whom and the quantity of oil obtained.

The back cover states that the work is a masterpiece and I have to agree. Whatever you want to know about Atlantic whaling, its history and the eventual conservation of whales, this is the text to read.