An Inordinate Fondness for Beetles: Campfire Conversations with Alfred Russel Wallace on People and Nature Based on Common Travel in the Malay Archipelago 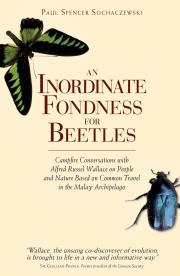 To those unacquainted with Alfred Russel Wallace, he may appear at first glance another of history's nearly men, like Scheele or Semmelweis, famous for not being as famous as perhaps he should be.
Without Wallace, Darwin may well never have published On the Origin of Species; without Darwin, Wallacism might have been the subject of the Scopes Trial.

That this book adds little of substance to that debate, and is certainly a poor cousin to the large and growing amount of Wallace scholarship in that area, is not the point. This is a book about Wallace's life, about Asia, about travel and the author, and its partial success stems not from historical revelation but from being true to its subtitle.

The narrative interposes one connecting theme after another between the very different lives of subject and author, wending leisurely from one topic to the next – sea turtles, poaching, colonialism, deforestation – and for the first half of the book, you do feel as though you are fireside, listening to an interesting new companion tell stories of some crazy friend who had travelled the world collecting beetles and getting ill.

There is some fascinating stuff here: Wallace emerges from the materialist, buttoned-up Victorian scientist mould a more fleshy, more mad, more spiritual intellectual force under Sochaczewski's talented evocation, and you may, as I did, grow to like him immensely.

However, as with so many campfire storytellers, the speaker in this case begins to get off topic as the night wears on. Chapters start to feel more and more like autobiographical pet projects tied to Wallace's life with increasing tenuousness, and some sections are far too long.

Perhaps, though, this is a deliberate attempt to give you the feeling of listening to a campfire story: the original point lost, the speaker drunk and talking in circles about themselves, and you wishing you had returned to your tent half an hour ago.