The Leatherback Turtle: Biology and Conservation 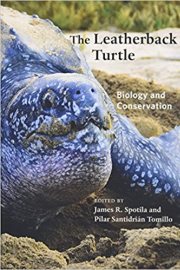 The result is a book divided into five parts with 18 chapters, including the conclusion. They are written by a range of authors who contribute works from leatherback turtle phylogeny to life history and physiology.

The fascination that the leatherback turtle draws lies in the enormous size to which these animals can grow. A selection of photographs between pages 128 and 129 describe the beauty, mystery and enormity of this creature, with perhaps the best image being one that shows a leatherback carrying jellyfish prey underwater.

The chapter on the leatherback's anatomy is not as well presented as it could have been. The black-and-white images are small and unclear, with some details almost invisible.

The colour plates that lie in between chapters four and five are taken from Schumacher (1973) and they are not set out favourably. As they are crammed into just four pages, the labelling lines and text are often too close to others, and the colouration (rusty red and orange) makes them quite difficult to make out. It is unclear why these diagrams are included in the text.

Conservation of the leatherback turtle is naturally a dominant aspect of the book, with at least 12 of the 18 chapters focused on their future. The editors conclude with a chapter on problems and solutions, with a statement saying some conservation efforts work and some do not. They highlight that new populations of leatherback turtle have been located, but knowledge of other populations is scarce, particularly around Papua New Guinea. Therefore, the book hopes to encourage and stimulate further research to secure the leatherback turtle's survival.