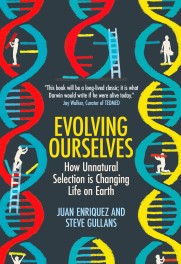 Evolving Ourselves tackles the intriguing and sometimes unsettling concept of human-driven evolution. While most of us are familiar with the concept of natural selection leading to 'survival of the fittest', Enriquez and Gullans introduce us to 'unnatural selection', an evolutionary process led by humans rather than nature. This process is fast becoming the main driver of our own evolution, as well as the environment and life we have engineered around us.

The authors lead you through an accessible and blissfully jargon-free journey into advances in science that have helped our species separate itself from the harsh forces of natural selection.
While 'unnatural selection' has negative connotations, this book looks at some of the great achievements of human ingenuity and discovery.

Antibiotics, vaccinations and Caesarean section births have all helped raise human life expectancy. That's not to say there are no detrimental consequences, however. In many countries, rates of asthma and allergies are on the rise, an unintended consequence of our desire to create germ-free environments for our children.

Despite the sometimes startling accounts of how the human race now dominates selection processes and engineers our planet and other living organisms, this book is fundamentally optimistic. It demonstrates just what humanity is capable of in the face of adversity and an uncertain future for our species.