The Cell: A Visual tour of the building blocks of life 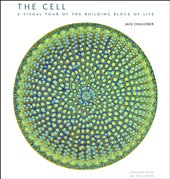 This attractive 192-page book is a welcome celebration of cells, those amazing units of life so often overlooked in popular science books and documentaries. However, after an introduction that nicely articulates the importance of cells and their complexity, this 'tour' takes readers on a peculiar route.

Within the opening chapter, we reach difficult concepts such as Mendelian inheritance and the workings of a microscope. It's not that these subjects shouldn't be covered, but how odd to expect lay readers to plough through genetics equations and lens diagrams before even the two main types of cell are defined.

In the same vein, readers reach a section on the green revolution in agriculture before they've read the chapter on single-celled organisms, the most abundant cells on the planet.

The phrase 'visual tour' and The Cell's coffee-table-book shape may also leave some disappointed. Many of the images are textbook-style diagrams or small photos. For a 'visual tour' there is a lot of text and it is not until p29 we see the first jaw-dropping full-page SEM rendering of a cell.

Eventually, the book begins to live up to the promise of its beautiful cover. There are some glorious images in the later chapters, from intricate single-celled marine organisms to the marvellous molecular imaginings of David Goodsell (featured in The Biologist, Vol 60(6) p18).

Ultimately, in its quest for scientific completeness, The Cell: A visual tour takes too many difficult and perhaps unnecessary diversions. Cells may be the units from which all life on Earth is built, but this book doesn't need to explain all of biology, which it at times seems to try to do.