Each year the Society awards twenty £500 travel grants for students or early career researchers to fund trips abroad that will help their work. Here is a selection of the inspiring reports of their experiences

Gaffkaemia is a fatal bacterial lobster disease that can cause significant economic loss to fisheries. It was thought to be endemic to American lobsters but there have been numerous outbreaks reported in European species. The gaffkaemia bacteria enter the lobster through damaged areas on the carapace and colonise the tissues and blood. The lobsters eventually die of septicaemia.

My grant allowed me to spend a month at the Atlantic Veterinary College's Lobster Science Centre (LSC) in Charlottetown, Canada, working alongside Professor Spencer Greenwood. My original plan was to learn about ways to test between the virulent and avirulent forms of the disease, using a protein capsule to differentiate the two forms of the bacterium. But new findings suggest that the 'virulence' may arise from bacterial concentrations, as even 'avirulent' forms were able to induce death, albeit after a longer time, just at higher concentrations.

I learned about other crustacean diseases including bitter crab disease, bumper car (caused by the ciliate Anophryoides haemophilia) and white spot syndrome virus, a pandemic shrimp disease that affects lobsters when induced in vitro. Due to changing seawater temperatures, I want to test which diseases may be present in UK waters.

While at LSC, I used their state of the art equipment to practise real time PCR and DNA extractions, and I hope to be able to use my new found skills to test crustacean samples from a Marine Conservation Zone.

As I now enter the final year of my PhD in lobster health at Swansea University, I think it is important to meet senior scientists within my field, sharing ideas and beginning collaborations.

Read more about Charlotte's experiences on her blog: www.cedavies72.blogspot.co.uk 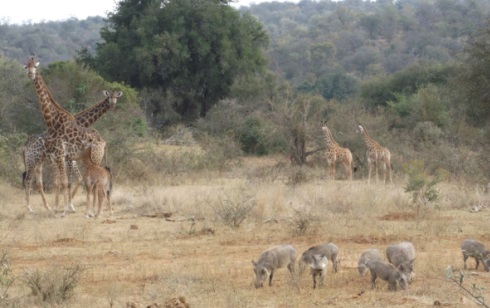 This summer I travelled to South Africa to assist the conservation group Operation Wallacea at the Balule Game Reserve in the Great Kruger National Park.

As part of our savannah ecology course, we took part in daily lectures and practical lessons, as well as insect dissections, insect and butterfly traps, bird surveys and habitat assessments. Bird surveys involve four people standing in a circle looking outwards in various directions, identifying bird species over the course of 10 minutes. Lectures helped us identify bird calls and their distinguishing features.

Birds are a good indicator species for diversity. My favourite was the African fish eagle, which I regularly spotted fishing on the river next to camp.

When doing habitat assessments we looked into the impact of elephants on the environment. Surprisingly, the elephant populations in these areas have become too great and they are now destroying the habitat of other species. The elephants eat the bark from the trees, stripping it all the way around in a process called ring barking, which kills the tree. Some elephants in other areas are being castrated to try to manage their population. Operation Wallacea takes research assistants out to their sites across the world to gain valuable data, which they can then use to identify whether their work is having a positive effect or whether another method needs to be implemented.

There were many highlights of my trip, but my favourite has to be rushing out of a carnivore lecture to see two male lions eating a fresh kill of a baby giraffe. Being out in the bush while studying the lecture material is unique. Driving around the reserve monitoring species, populations and their location, gives a fantastic insight into the environment you are in and the species living there.

I have gained invaluable experience in conservation techniques and other practical skills and seen sights I will never forget. It has been a wonderful experience and I've met some inspiring people from across the world who gave me the motivation to carry on with conservation work. 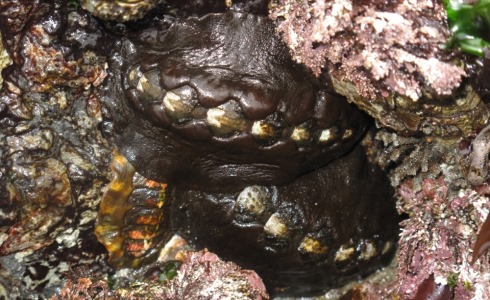 Although chitons are common, we know little about the ecology of these marine molluscs (class Polyplacophora) and next to nothing about their potential vulnerability to climate change.

I am interested in how climate change, and the resulting ocean acidification, increase in temperature and hypoxia, alters metabolism in marine invertebrates. During my research at Bamfield Marine Sciences Centre, Vancouver Island, I collected approximately 100 specimens of Katharina tunicata, a common large species in this region. To examine metabolic scaling, or how metabolism changes with body size, I collected individuals from the full size range of the species, from under 0.5g to over 50g wet mass. Half the specimens came from the intertidal zone (seashore) and half from the subtidal zone (deeper sea).

In the intertidal zone, organisms are exposed to large twice-daily temperature fluctuations when the tide goes out, whereas the subtidal habitat is more stable. These different populations were acclimated to a temperature increase of 5°C, along with control groups held at ambient seawater temperatures, and these groups were then examined for metabolic rate in the form of oxygen uptake using optical oxygen probes.

During my visit to Bamfield, I also studied scaphopods (also known as tusk shells). These scarce molluscs live at depth in sediment where they feed on organic particulate matter, and are often found in great densities. Like the chitons, very little is known about the physiology and ecology of scaphopods, or their contribution to nutrient cycling in the marine environment. I conducted the first physiological experimental work ever done on this group, measuring metabolic rate of the species Rhabdus rectius at different temperatures. 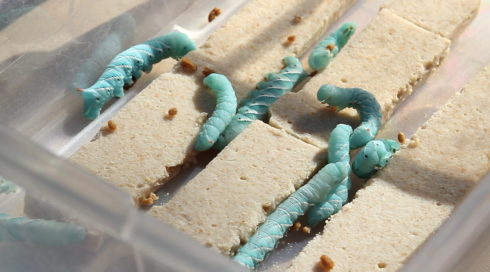 I am currently a postdoctoral researcher without any funding for attending conferences, so the Society's grant enabled me to go to Boulder, Colorado, for the 50th Annual Conference of the Animal Behavior Society.

Since January I have been conducting research in Anna Dornhaus' social insect lab at the University of Arizona. I have been investigating how bumblebees
learn to handle morphologically complex flowers. Bumblebees forage on a wide range of flowers, which vary in how complex they are and how difficult it is for the bee to find the nectar.

One puzzling question is why and how they learn to handle more complex flowers, when there are simpler options available that do not require learning. I have been testing Bombus impatiens with artificial flowers to investigate this question, which may also shed light on how other animals persevere with learning a task when simpler options are more readily available.

I found that bees were more likely to persevere with learning how to handle complex flowers when the reward from the complex flower was greater than from simpler flowers. However, surprisingly, there was a large amount of variation between individuals in the strategies they adopted, which I will study further.

Attending the Animal Behavior Society conference allowed me to present my findings from this experiment to scientists and students working on animal behaviour, and receive valuable feedback.

After the conference, alongside other postdocs and PhD students, I spent a morning demonstrating science to the public. After four days of listening to and talking about science with scientists, it felt refreshing to be able to share some of our enthusiasm with non-scientists. I helped out on a stall alongside members of Dan Papaj's lab (University of Arizona), with live tobacco hornworm caterpillars (Manduca sexta), pipevine swallowtail caterpillars and butterflies.

I have written more extensively about my experience at the conference online for Scientific American, blogs.scientificamerican.com/not-bad-science 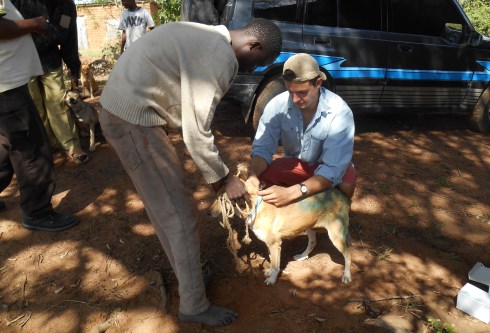 A vet helps assess a dog

Rabies is responsible for the deaths of approximately 24,500 people each year in Africa. The disease is carried by domestic dog populations which transmit it to humans, livestock and wildlife. This effect has been demonstrated by long term studies in the Serengeti ecosystem in Tanzania, where rabies kills humans and livestock. Rabies has also been implicated in the local extinction of the African wild dog (Lycaon pictus) in some areas.

Lincoln Park Zoo runs an ongoing project that aims to eliminate rabies from the Serengeti. Each year, veterinarians and field staff conduct a vaccination campaign targeted at domestic dog populations in the villages surrounding the Serengeti National Park. In the past, such annual campaigns have been successful in controlling rabies, but in order to maintain population level immunity between campaigns – and eliminate the disease – there is an empirically derived consensus that vaccination coverage of 70% must be achieved. Therefore, in order for the project to be successful, it is crucial to establish a reliable and economically sustainable method to estimate vaccination coverage.

In November and December 2013, I joined Abel Bui Minyoo, a student from the Nelson Mandela Institute of Science and Technology in Tanzania. Funded by a travel grant from the Society, our research sought to compare different methods for assessing vaccination coverage in the agro-pastoralist villages bordering the west of the Serengeti National Park.

In each village we used three different methods for comparison. The first was a village-wide census in which the number of vaccinated and unvaccinated dogs was recorded in every household. Although this method was the most costly and time consuming, it was deemed the most reliable. Therefore, we made this the basic standard against which other methods would be assessed. The second method was a questionnaire survey in which the proportion of vaccinated and unvaccinated dogs was estimated based on a sample of households from each village. The final method involved marking vaccinated dogs with livestock spray and visible collars, after which transects were driven through the villages and the number of marked and unmarked dogs recorded.

Considering the burden of rabies, our research will be valuable to the biological sciences insofar as it will hopefully contribute to more effective vaccination campaigns in the future – in the Serengeti and perhaps even elsewhere.

The aim of the travel grant scheme is to fund overseas travel in connection with biological study, teaching or research for those who would otherwise be unlikely to be able to travel. Twenty £500 grants are awarded in two rounds: spring (March) and autumn (October). The deadline for the next round of applications in 2014 is 31st October. For more details, www.societyofbiology.org/travelgrant